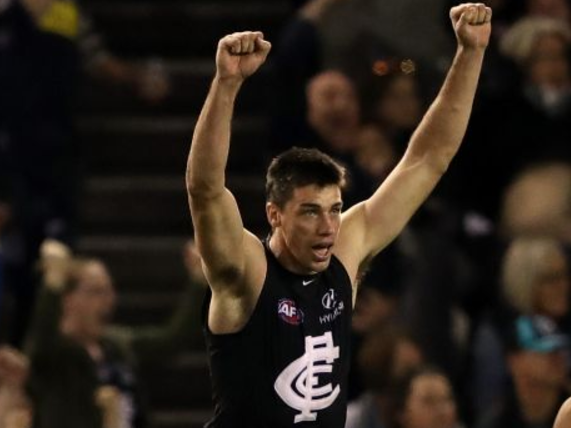 Hawthorn captain Jarryd Roughead spoke to 3AW after the game.

He said Carlton found the “blueprint” on how to play James Sicily.

Jed Lamb got under the fiery Hawk’s skin, resulting in Sicily conceding seven free kicks for the game.

“(Sicily) has got to make sure he has the right people around him,” Roughead said.

Blues gun Sam Docherty had 31 disposals and took 15 marks at half back.

Docherty was awarded the David Parkin Medal as best on ground.

He told 3AW he was a Carlton fan growing up and knew all about the losing streak.

He said the result was good reward for effort.

“We’ve put in a helluva lot of hard work this year and we’ve come very close,” he said.

“To get a result over a team we respect is really pleasing.”

Click play to hear from Docherty in the rooms

Carlton has beaten the Hawks for the first time since 2005.

The Blues won by seven points on the back of a solid defensive display.

Jimmy Bartel was full of praise for the Blues’ young brigade, with two being particularly impressive.

“Charlie Curnow stood up in big moments, and Jarrod Pickett with his defensive pressure,” Jimmy said.

It’s Carlton who hold something of a surprise three-point lead at the main break.

Sam Docherty has been prolific off half-back, while the Blue forwards are looking dangerous with every entry into 50.

Tom Mitchell has been everywhere for the Hawks, racking up 22 disposals.

“Maybe put Kerridge a bit closer (to Mitchell) and push him into the stoppage,” Jimmy said.

“Force him to kick the ball. He’s a handball-first player.”

Hawthorn has made a late change.

The Blues will line up as selected.

The last time the Blues beat the Hawks was Round 6, 2005, when Jarrad Waite booted five and Eddie Betts three.

But while history has its place, there’s plenty at stake on Saturday night – not least, Hawthorn’s finals hopes.

The Hawks can still make the finals if a few results fall their way, but first they must beat the Blues.

Can Carlton snap the streak and draw curtains on Hawthorn’s season?