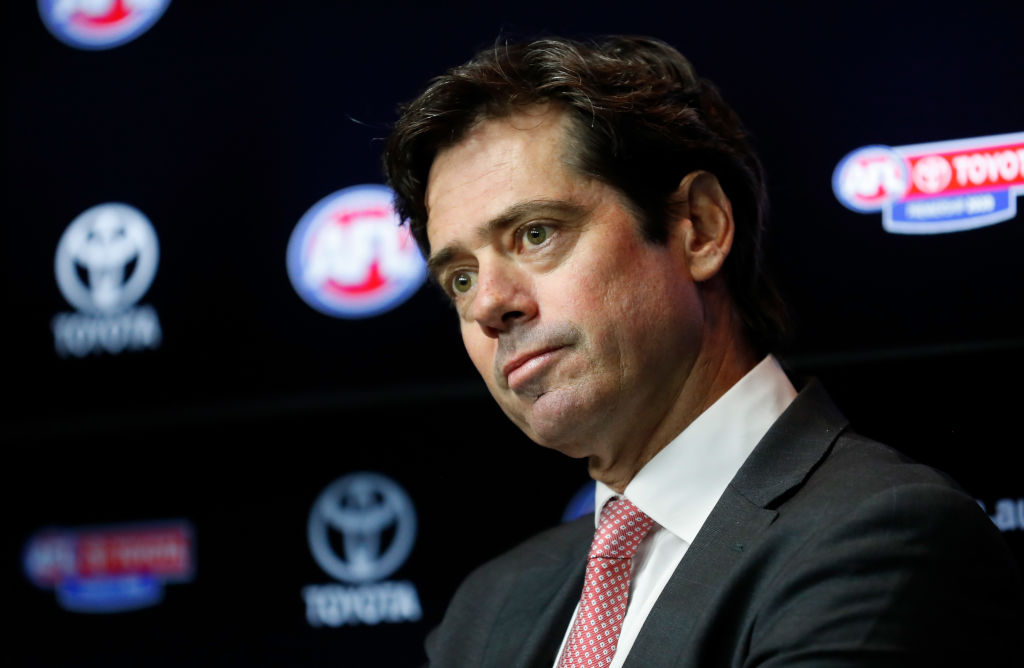 At a press conference, a devastated McLachlan said the AFL was prepared to run as late as possible into 2020 to complete the season if it was required.

“To say this is the most serious threat to our game in 100 years is an understatement,” he said.

The AFL today announced that it would immediately move to suspend the 2020 Toyota AFL Premiership season at the conclusion of this weekend’s matches and conclude the NAB AFL Women’s season as a result of the continuing spread of the COVID-19 virus.

Today’s match between West Coast Eagles and Melbourne will be the final match before the AFL season goes into a temporary halt with the suspension of all games until May 31, 2020.

The AFL will review the situation by the end of April to determine whether a further suspension period would be required.

Today’s AFLW semi-final between Carlton and Brisbane Lions will be the last NAB AFL Women’s match to be played with the 2020 season ending today. Given the twin conference structure and that the finals series was not completed, the AFL Commission has determined no premiership will be awarded for this season, following a recommendation from the AFL Executive.

AFL CEO Gillon McLachlan said the worsening situation in the community and the decision by various State Governments to close their borders meant it was time for the AFL to immediately stop the AFL and AFLW competitions.

He said all AFL club training would be suspended while the AFL worked with the clubs on the best way to manage players ahead of games being resumed. The May 31, 2020 resumption time for the season would be reviewed and – depending on the medical advice and Government regulations in place at the time – the date could be extended out.

Mr McLachlan said over the next 48 hours the AFL and clubs would detail the drastic and immediate steps needed to be taken to cut costs.

Mr McLachlan said the AFL industry was facing its biggest financial crisis in its history, but the key priority was to do everything possible to keep players, staff, and supporters healthy and well through this pandemic.

“Our industry provides livelihoods for thousands and thousands of people but our key focus at the moment – like every organisation in the country – is to do everything that needs to be done to help slow the spread of this virus and to keep people as healthy as possible,” Mr McLachlan said.

“I know that everyone involved in our game and our millions of supporters will be impacted by this decision and that many people will suffer significant hardship as are people right across the community but I also know that we all have a responsibility to the community and each other. And we have the will to work collectively to overcome this crisis.

Mr McLachlan said the AFL had been given advice by the Government and the Chief Medical Officers that it was right to start the season, but that advice had also included that it would be paused at some stage.

Mr McLachlan said the AFL plan was to play all remaining 144 games plus finals this year and the competition would need to remain agile and flexible on when those games were scheduled and when play returned. He said the AFL was prepared to run as late as possible in 2020 to complete the season if it was required.

He said the AFL focus over the coming days was working with the clubs to embed the medical protocols provided, finalise the operating model for the clubs during the temporary suspension period and working with funding partners to secure a line of credit to fund cash shortfalls across the industry while allowing the best possible chance for a return to football matches.

An alternative fixture based on a season of remaining 144 games plus finals, would also be worked on over the coming weeks.

Mr McLachlan thanked the Federal and State and Territory Governments for their advice and support over the past few weeks and the whole football community including broadcast and corporate partners of the AFL and clubs, members and supporters – for their support and understanding in what has been an unprecedented time in the game’s history.

“I also want to thank our staff who have been tireless in working with everyone across football through this issue. The only way that footy can find a way through is to continue to be agile, flexible and – most importantly – united.”