3AW’s Pub of the Week: The Golden Fleece Hotel, Melton 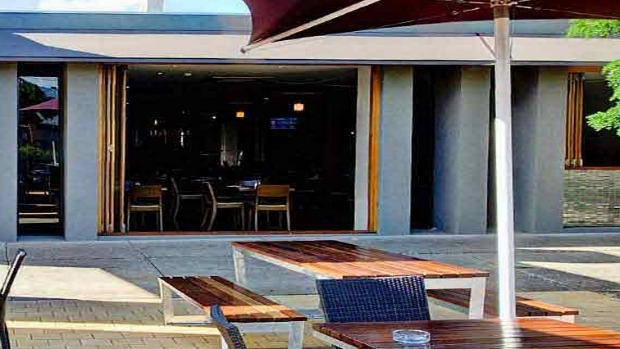 The Golden Fleece Hotel in Melton is a large, modern, big outer suburban pub which runs true to the format that most of its brethren do when located this distance from the CBD.

It covers a full block between Unitt and High St, and its appearance strikes you as being a larger version of what first home buyers would consider on the ever burgeoning estates  of outer Melbourne.

There are  a number of areas but, as is expected, large dining, bar and outdoor areas housing TAB and pokies are the dominant landscape with timber/brown being the colour of choice.

Credit to the pub as the pokies are not invasive.

As far as food and drink goes, don’t expect any tricks. It is safe and plentiful but fair play is given to the menu as most dishes fall in an expected price category for a fully plated meal and there is choice.

Meal deals, club rewards and entertainment are part of the package also. On a recent Wednesday lunchtime, the Morning Melodies were packed to the rafters and the offer of a two-course, with entertainment ($15) was generous.

Melton is a massive outer suburb and your choice of pubs (only two as far as I know) not only is limited but almost identical.

That said, if the Golden Fleece is a safe bet.

Having written about big pubs recently, the Golden Fleece was exactly what I thought it would like and to that end, neither over nor underwhelmed me.

With a packed dining room post melodies, the cavernous sports bar was chosen. Strangely you couldn’t order from the bistro menu in there, but had to go to the Bistro and they would bring it back out to the Sports Bar.

Entrees are few in number but the Fleece is doing some sliders ($3.5/ea) of Beef, Pork or Chicken while Arancini and Prawns.

Four salads, around $15 are available including a Warm Beef which I thought the fad of ‘warm’ and ‘salad’ had passed.

Pastas weigh in around the $20, seafood $25. Happy to give the thumbs up to the pub as the shellfish tried was really good.

(As an unrelated aside, 12-24 hour this, 120 day-6 month aged that, are you absolutely convinced that this has really happened, or the new version of identifying where your dish came from, e.g, Footscray chook, ascot vale salad etc).

Beer was fine, the wine list small and fairly predictable. The Golden Fleece seemed popular amongst locals on this Thursday afternoon.

However one staple of pub life missed and I hope this was aberrant as pubs live or die on the reputation of one thing – The Chicken Parma.

?       Garlic Prawn Bruschetta.  $16. 6 pieces. Like its other counterpart, the Caesar Salad, the artist known as Bruschetta comes in many, many forms. This one was a beauty. Fresh, garlicky prawns had a real taste and crunch. Bread needed to be a tad thicker as the mix of balsamic and juice tended to soften the thinly sliced bread. Really good start.

?       Parma. $12. No. I remembered why I avoid. The ultra thin coating came away too easily, the chook, although plentiful has little taste. If they are being brought in and cooked up, then go back to supplier. Miss. If they are done on premise, go back and check the process. No. No.

First time visit and got what I expected.

It is a big pub, out in the burbs, doing what big pubs do. Pubs like the Golden Fleece are here to stay and in time become the norm as the sprawl continues ever outward.

Nothing so outrageous as to knock the pub as one miss with the meal doesn’t condemn.

No real faults here at the Golden Fleece.