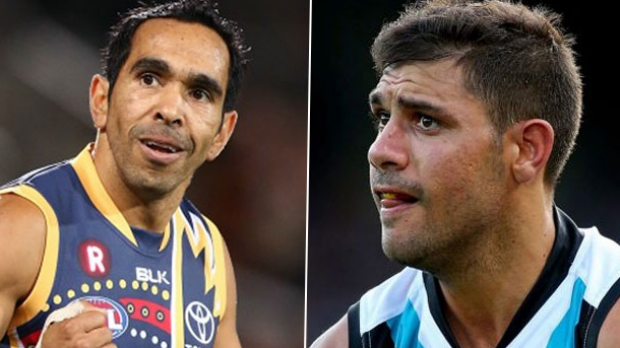 The behaviour of football fans in Adelaide has come under scrutiny following multiple claims of racial abuse in the wake of Saturday night’s showdown.

The Crows are furious after gun forward Eddie Betts was again subject to slurs from Power fans.

But Port Adelaide has since revealed it’s investigating claims its own player – Paddy Ryder – was also racially taunted by a spectator during the match.

The Crows said they condemned ‘any such behaviour’ in a strongly-worded statement.

‘In listening to our playing group and our Aboriginal and Torres Strait Islander players in particular, it is clear how damaging and impactful racism is to them and their families.

‘Our entire playing group and our club stand together on this, unequivocally.’

Port Adelaide said it would make no further comment until its investigations were completed.

‘We’re sad that our brothers and sisters are still experiencing racial vilification, despite the ongoing education and promotion done within the football industry and wider society,’ he said.

‘This has been happening for far too long and we, as indigenous footballers, have had enough.

‘We deserve more respect than we are being shown.

‘The abuse directed towards players is more than just words and people need to understand the impact that it has on the player, their family, their children and their community.

‘While it’s heartening that these incidents are being called out, there’s a lot of work to do before we can claim to be a truly inclusive game.’

It’s not the first time Betts has been subject to racial abuse from a Port Adelaide fan, with the Power cancelling the membership of a female supporter who threw a banana at the superstar forward last season.

AFL chief executive Gillon McLachlan said the football community must continue to call out racism whenever it occurs.

‘Racism is hurtful and damaging to individuals and communities, and when it happens in football, we must call it out,’ he said.

‘Our game has a responsibility to our players, and a role to play in the community on issues of racism and vilification.

‘Our players deserve respect, and we ask that people understand the impact of their comments on them, their families and our community.

‘We know our game can do more.’

Saturday night’s showdown was also marred by a violent brawl in the crowd, which was caught on camera.