The Victorian Labor Party remains in crisis over allegations of branch stacking and the misuse of taxpayer-funded government staff.

Marlene Kairouz (pictured above) a factional ally of Adem Somyurek, has become the third Labor minister to leave her job after she was recorded on tapes obtained by The Age and 60 Minutes.

In a statement announcing her resignation from Cabinet, Ms Kairouz denied allegations made against her.

“I look forward to the opportunity to clear my name,” the statement read. 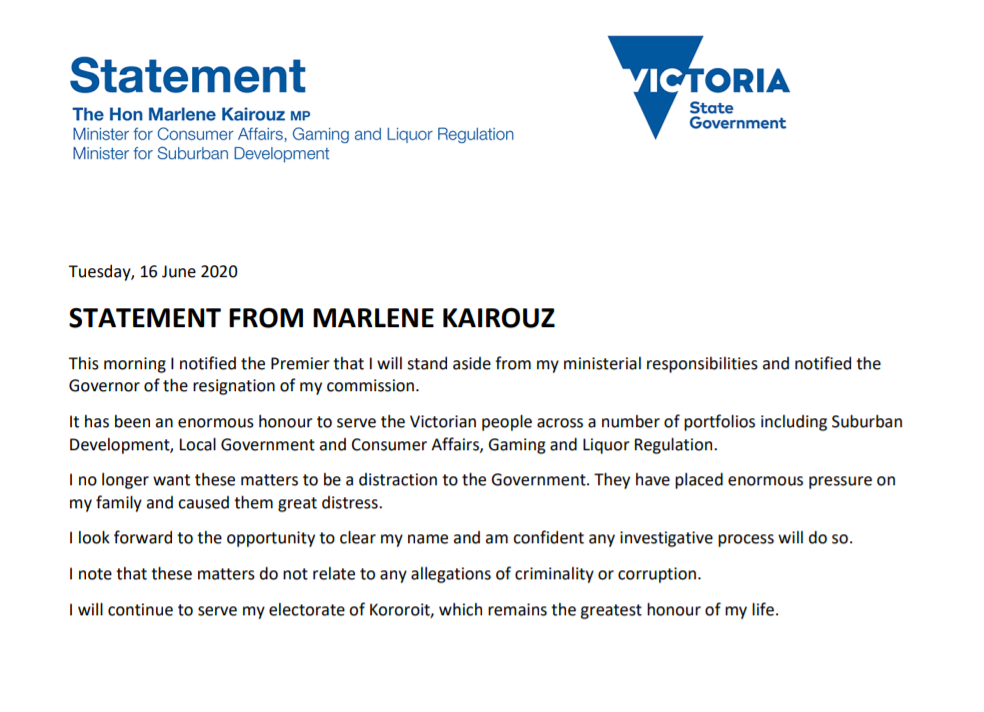 Click PLAY to hear Ross and John speak with the investigative journalist behind the story, Nick McKenzie.

Right faction warlord Somyurek was yesterday sacked from the cabinet and resigned from the ALP after being named at the heart of the allegations, which were uncovered in a year-long investigation by 60 Minutes and The Age.

“His conduct and his comments are completely deplorable, they are shameful, and it is on that basis that there is no place in my government for him.”

Mr Somyurek reportedly quit the Australian Labor Party, ahead of moves by the National Executive to expel him from the party.

The Premier has referred the allegations aired against Mr Somyurek to Victoria Police and the Independent Broad-based Anti-Corruption Commission (IBAC).

Press PLAY below to hear Mr Andrews announce he has SACKED Mr Somyurek.

Mr Somyurek issued a defiant statement saying he was standing down from cabinet over homophobic and abusive language, but rejecting all claims of wrongdoing in regard to branch stacking (read the statement below).

Using video and audio recordings of the minister, it’s alleged in The Age/60 Minutes report that ministerial and electorate staff, who were paid by the taxpayer, worked instead to stack ALP branches with new members loyal to Mr Somyurek, giving him internal control.

In the recordings, he can be heard urging associates to falsify signatures on ALP membership forms and paying wads of cash to cover membership fees.

He is also heard threatening the careers of fellow state ministers and some Federal Labor MPs, reserving his worst vitriol for the Minister for Prevention of Family Violence and Women, Gabrielle Williams.

He could be heard calling her a “bitch” and a “moll”, whose career he intends to destroy.

In more recordings, Mr Somyurek highlights his perceived power within the party, saying the Premier of the day is up to him.

He appointed Minister for Local Government by Mr Andrews in 2018, three years after his previous stint in cabinet was cut short in 2015 following an allegation of bullying when he was the Minister for Small Business, Innovation and Trade.

When he was a backbencher in 2009, he lost his job as chair of the Electoral Matters Committee for a driving offence.

This morning I advised the Premier of my resignation as a Minister.

It follows publication of numerous personal and private conversations between myself and long term friend and factional ally of mine.

I will be taking steps to seek a police investigation into these matters.

With respect to allegations made around memberships of the party, I reject those and will be providing a rigorous defence during any party process.

The conversations published without my knowledge or consent were with someone who I trusted about internal party matters. There are many robust discussions that occur on any given day in the Labor Party across all factions.

However I accept and take full responsibility for the fact that my language on a number of occasions was simply not appropriate. While Ms Williams and I have been at odds factionally for many years, I should not have used the language I did about her and I apologise to her unequivocally.

Further, I am deeply sorry for language I used regarding highly valued and exceptional young people who are members of the LGBTI community.

These comments have quite rightly cost me my job.