The Archbishop of Melbourne, Peter Comensoli, says a provocative tweet from Pope Francis has been “entirely misunderstood” by the public and had nothing to do with the George Pell verdict in the High Court.

The Pope has been slammed over the tweet, pictured below, which many interpreted as a reference to Pell and an insult to victims of abuse. 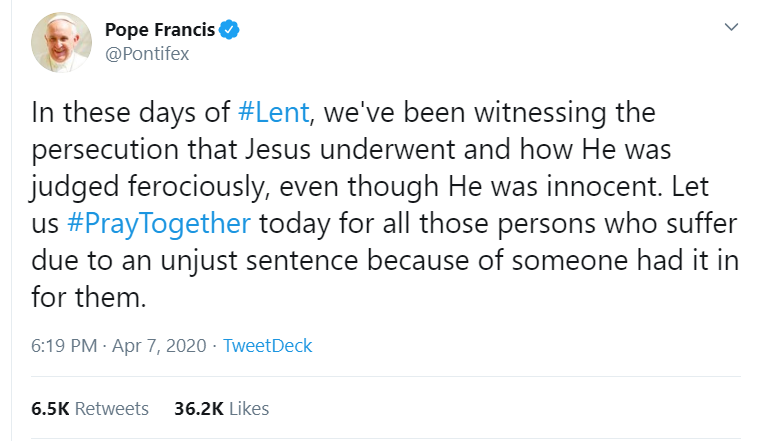 But speaking with Neil Mitchell, Archbishop Comensoli said he didn’t believe there was any implied reference to Pell.

“I think the tweet has been entirely misunderstood,” Archbishop Comensoli said on 3AW Mornings.

“We’re in Holy Week, as Catholic Christians, and we have set readings for every day.

“They are just what they are for each day (and) yesterday’s reading was about the betrayal of Judas Iscariot of Jesus.

Archbishop Comensoli, a friend of Pell, said he visited the Cardinal twice in prison while he was doing a routine visit for other inmates.

But he did not feel any “joy” or “vindication” when Tuesday’s verdict was handed down.

“I had two reactions yesterday, when the news came through,” Archbishop Comensoli said.

“The first was a sense of relief – a relief that the processes of our legal system had to come a fairly emphatic and unanimous decision around the not guilty nature of this.

Archbishop Comensoli said he was distressed by a vandal attack on St Patrick’s Cathedral.

“Yes, but I’m also not entirely surprised because there is such strong emotions around this matter,” Neil Mitchell said.

Church officials had covered up this graffiti “Rot in Hell Pell” at St. Patrick’s Cathedral with plastic . But revealed it to allow police investigators to examine it. 6pm #7NewsMelbourne pic.twitter.com/j3LlIJxwWs