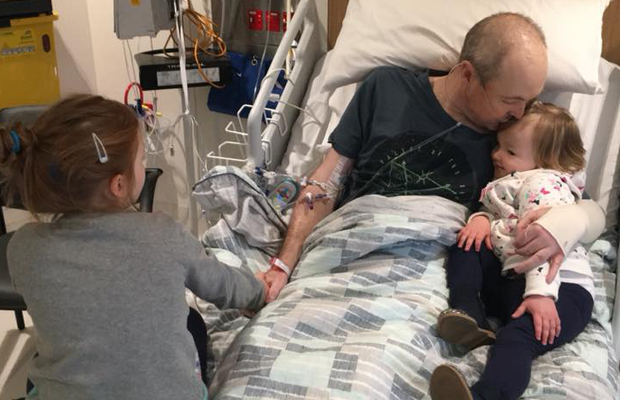 A long-time friend of Jarrod Lyle has revealed the Australian golfer was plotting a comeback as recently as June.

Messages of support have been flowing following the news Lyle will stop cancer treatment and go into palliative care.

“Earlier today Jarrod made the decision to stop active treatment and begin palliative care,” she wrote.

“He has given everything that he’s got to give, and his poor body cannot take anymore.

“We’ll be taking him closer to home in the next couple of days so he can finally leave the hospital.”

The post included a photo of Lyle in his hospital bed, cuddling his two young daughters.

“My focus as of today is on our girls and doing whatever I can to get them through the challenges ahead,” Bri wrote.

“Jarrod will be closer to them very soon, and will spend as much time as he can with them.

“When it’s appropriate, I will post details of a memorial service.

“In the meantime we ask that you respect our privacy at this difficult time.”

One of Lyle’s close friends, Evan Gayle, told Neil Mitchell that Lyle was planning to return to competitive golf less than two months ago.

“My family spent a good day with him on June 9 down at the house at Torquay,” he said.

“All the signs were looking good back then. The tests were going well.

“They were looking at potentially doing a comeback in 2020 at the Australian Open and Vic Open.

“The doctors were saying he was doing as good as he could be, so that was what he was aiming for.”

Tributes have been flowing in from around the world this morning.

Speaking in Ohio, an emotional Adam Scott says Lyle has been an inspiration for 20 years.

Just heard the news about Jarrod Lyle. Life is very precious and you have been so strong. We are thinking and praying for you and your family now more than ever. – Ernie, Liezl, Samantha and Ben

Life is precious and we all take it for granted too often – seeing the picture of @jarrodlylepga hugging his family with not long to live brought tears to my eyes. Peace be with you, you will be missed Jarrod x

Jarrod Lyle update. We need a miracle for this great man please🙏🙏 https://t.co/ET18qD1TF2

Brave brave
Harsh world we live in
Inspirational he has been https://t.co/ffWJVaXd8K

Just reading the bad news on Jarrod Lyle… I was afraid this day was coming. Jarrod is a fighter both on and off the course and was always great to play with. Prayers to him his and his beautiful family! 🙏🙏