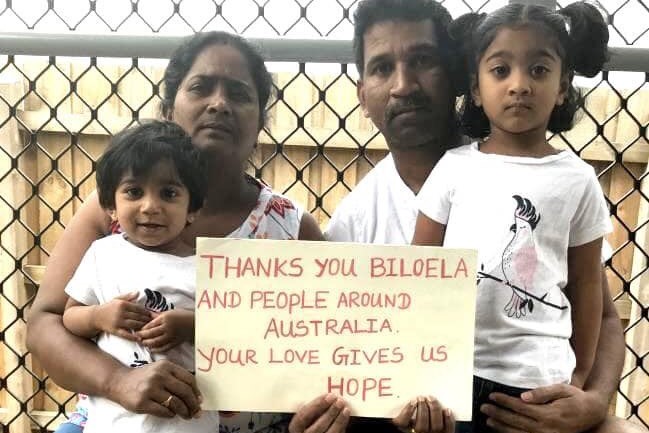 Home Affairs Minister Peter Dutton says he will not help a Tamil family and their two Australian-born daughters, who are desperately fighting for permission to stay in Australia.

The couple, Priya and Nadesalingam, arrived in the country separately as asylum seekers in 2012 and 2013.

They settled in the Queensland town of Biloea on a temporary bridging visa, and had two daughter — Kopika, 4, and Tharunicaa, 2.

The family found out last week that their bid to stay in Australia had been rejected, but their community has rallied around them, calling on the immigration minister to intervene.

The family were put on a flight to Sri Lanka on Thursday night, but their plane was grounded in Darwin after a last minute temporary court injunction was granted.

They have now been sent to Christmas Island, where they will remain until September 18.

A petition to allow the family to stay has attracted almost 250,000 signatures, and protests in support of the family have been held across the country.

But Home Affairs Minister Peter Dutton said he will not let the family stay.

“There are about 68 million people in the world who are displaced now, all of them with terrible circumstances,” he told 3AW’s Neil Mitchell.

“All of them would want to come to a country like ours, and you can understand why.”

Mr Dutton said the couple were never given any indication that they would be allowed to stay in Australia permanently.

“This family, long before they had children, were told that they had no claim to refugee status. They didn’t have a case to make,” he said.

“At no stage since they arrived in 2012-13 was any indication given that they could stay.”

The immigration minister said allowing the family to stay in Australia would set a precedent.

He said there is “no question” people smugglers are looking at the case closely.

“I think it’s important for people to understand that Sri Lanka, for us now, is the major threat on the matrix.

“You’ve got to look at each of these cases.

“There are hundreds each year where we intervene compassionately to help kids out, to help families out. The public never sees any of that.”

Mr Dutton said his family have been personally targeted because of his refusal to intervene in the case.

“The personal attacks are what they are. There’s nothing I can do about that. On me, on my wife, on my children, that continues,” he said.