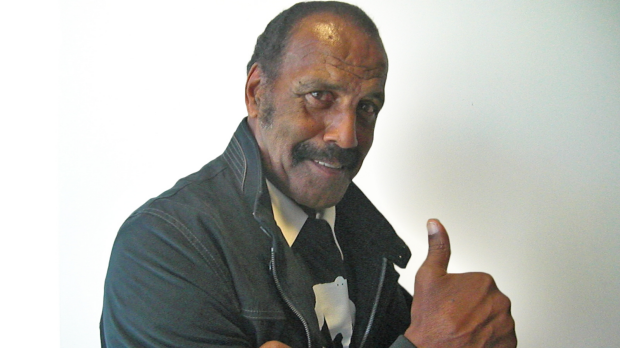 When Fred Williamson went to Hollywood he was in no doubt about what he wanted. With the civil rights movement in full swing and no black heroes on the big screen he decided to fill that void.

Having made his name in pro-football as ‘The Hammer’ and after a successful career as an architect, Williamson used the heft of his fame to talk his way into a job on the breakthrough sitcom Julia with Diahann Carroll, the first to feature a black woman. He insisted to its producer that having her with a new boyfriend every week sent a bad message and that he should be cast as her regular beau. It worked.

That lead to a chance meeting in the studio canteen with director Robert Altman who invited him to direct the now-famous football scene in MASH (1970) which landed Williamson the role as Captain ‘Spearchucker’ Jones.

From there, Williamson began initiating  movie projects, casting himself as the alpha-male hero who always wins and who must never die. He held a press conference announcing his availability, provided his character was triumphant.

A brush with Universal taught Williamson to steer clear of studios. A lead role in the successful Bond-like action film That Man Bolt (1973) was meant to lead to other films, but the studio decided to pay him out rather than be the first to make black action stars a regular feature of 1970s American cinema. So Williamson went out on his own.

When Shaft (1971) with Richard Roundtree became a huge hit Universal called back, but Williamson was not interested. He decided that being an independent filmmaker was the best way to go.

Developing his fanbase in Asia and Europe, where he remains huge, Williamson survived the blaxploitation years to continue making low-budget action films where his prowess with martial arts and automatic weapons saved the day. Using his hard-won marketing savvy and the value of pre-sales, Williamson keeps costs low to ensure his films always make money.

Now 77, Williamson is proud of his formidable body of work, yet is strangely coy about the influence he had over the audiences of the 1970s and with present-day action stars such as Will Smith, Denzel Washington, Wesley Snipes and Eddie Murphy.

Despite having a healthy ego, he is both cautious about claiming too much credit and cynical about those he believes owe him acknowledgement.

We had a terrific interview with Williamson spanning his career, achievements and opinions. Ever-quotable and controversial, he is not somebody used to holding back and remains in tireless good humour.

View a special condensed edit of our interview

For the special ‘luxury’ edit, grab a coffee and sit back with the extended version here

For tickets and information visit: www.monsterfest.com.au