BLOG: 1st Test Australia vs Pakistan at the Gabba| Day 2 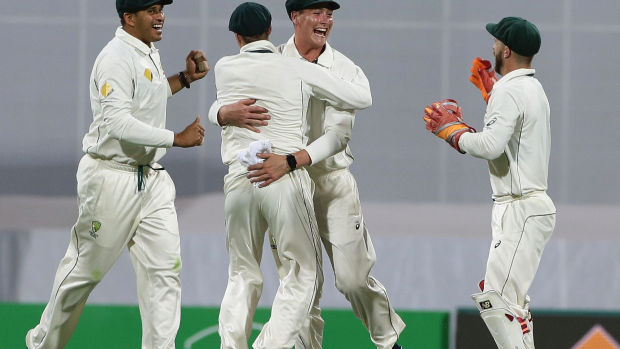 A ruthless and harrowing session of Test cricket sees Australia closing in on a 1st innings lead of more than 300 .It was an exceptional display by Australia in the field as Starc and Hazlewood took 3 wickets a piece and Bird bowled well for his 2.  All dismissals except Hazlewood’s c&b were taken behind the batsman.

The battle goes on for Pakistan.  Aging stalwarts of Pakistan cricket Misbah ul Haq and Younis Khan struggled against the quality dangerous bowling. Sami Aslam battled unflinchingly for his 22. He was twice stuck on the helmet and once on the hand but ultimately made an error and paid the price.  Sarfraz Ahmed played the way he always does and will resume tomorrow on 31.

Congratulations go to Peter Handscomb on his maiden Test century.

Hear Ian Chappell and Mike Hussey wrap up a compelling session at the Gabba.

Resuming after tea on 7/377 Handscomb added just 2 more runs departing to a warm ovation from the Gabba crowd. However Australia more than just ground out another 52 more runs, Lyon and Bird’s 10th wicket partnership of 49 was an entertaining display of shot making.

Despite not yet being back to the top of his game, it is always exciting to see Mitch Starc steam in, new ball in hand, towards a crouching slips cordon.  And Josh Hazlewood seems to grow between Tests.   It’s going to be tough going for the Pakistan batsmen as we head in the last session under lights.

‘I don’t think Peter Handscomb is going anywhere anytime soon.  He’s batted really, really well.  He has shown everyone he is good enough to be there’  reckons Mike Hussey

The Australian batsmen would be disappointed by the mode of their dismissals but it’s testament to the patience and pressure from the Pakistan bowlers despite several dropped catches and misfields.

‘Australia are very good at refreshing’ ?Tim Lane reflected at tea ‘Do you think the Australian selectors would be emboldened by their selections and not be afraid and put their faith in youth?’

‘Game on’: Carl Rackemann and Bruce Eva sum up the 1st session of day 2

Click here to catch up on all the action from day 1.