BLOG: 1st Test Australia vs Pakistan at the Gabba – Day One 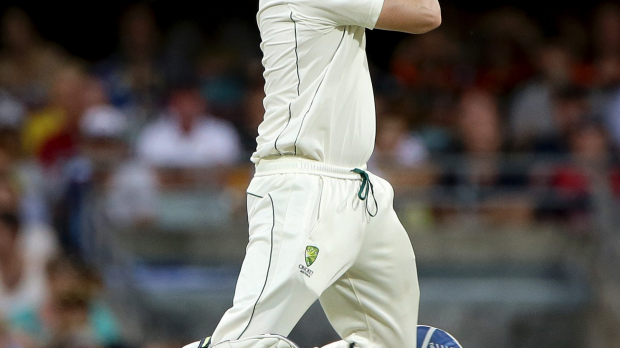 Debate will continue as to where Steve Smith sits in comparison to the greats of cricket.  But tonight, under lights at the Gabba, he scored his 16th Test century, against a 7th Test playing nation.  Smith’s animated celebration is suggests this achievement meant as much as it could to him.

Mike Hussey: ‘Part of the battle of Test cricket is knowing your game and when you figure out how you bat best and when you score runs having the ability to stick to it. He’s figured his way, he has got a unique technique, it is bit different but it works for him.  He has a great temperament and a great presence out there.  He looks like he belongs, calm and in control.’

Tim Lane: ‘If cricket, as they say more that any other sport, reveals character.  You do get a sense of who they are by the way they go about it’

Mike Hussey and Dean Jones reflect on a marvellous century from skipper Steve Smith and the impressive innings of Peter Handscomb.

A maiden Test half century for Matt Renshaw on his home ground has drawn strong praise from commentators and adoration from an increasingly vocal Gabba crowd.  There were both moments of grit and overconfidence from the rookie opener against some first class bowling.

Carl Rackemann observed on the MRN coverage that good Test batsmen score a hundred runs every 4 innings.  Before this match Steve Smith was sitting on a hundred nearly every 3 innings, currently he is unbeaten on 54.  With him at the crease heading into the last session is Peter Handscomb (16).  Click play for highlights and analysis from the Gabba.

Australia started Day 1 in solid fashion with openers David Warner and Matthew Renshaw putting on a 70 run partnership in an evenly contested session. Mohammad Amir struck for Pakistan snaring the opening wicket of Warner for 32, ‘He was never quite himself this morning, it wan an uncharacteristically subdued innings’ commented Tim Lane. Usman Khawaja was next to the crease and the very next over played a half volley straight to Niazi off the bowling of Shah and Australia had lost two in quick succession. Pakistan looked lack luster early but have managed to get their game back on track. Renshaw’s clearly enjoying playing on his home ground in just his second match and will be looking to get on with it at the resumption of play, at tea Australia 2/89.

Click play to hear Ian Chappell and Greg Matthews analysis of the first session along with all the sessions highlights.

The Australian test side look to continue their long-standing dominance at the GABBA when they face Pakistan in the first test in Brisbane today. Australia have not lost a test match at the GABBA since 1988 and will want to continue that form on an evenly covered green pitch at the GABBA. Australia go in with an unchanged line-up sticking with spinner Nathan Lyon. Speaking to Dean Jones shortly after the toss, Australian skipper Steve Smith said ‘There was some discussion but we’re backing Nathan into the game’