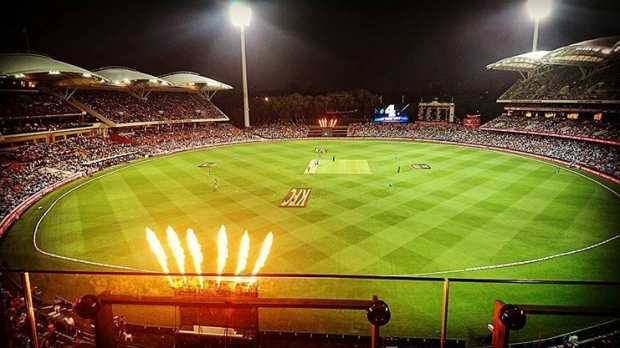 The Brisbane Heat have continued their impressive winning record at the Adelaide Oval defeating the Adelaide Strikers by 10 runs in front of more than 38,000 fans.

Click play to hear all the 2nd Innings highlights and analysis

The Adelaide Strikers won the toss and elected to bowl first and gee did they feel the heat early with big hitters Brendon McCullum and Jimmy Peirson putting on a show.

In an explosive batting display the pair piled on 79 runs and that was just in the power-play. It wasn’t until the 9th over that the Strikers got the breakthrough when Peirson was caught deep for 46 off the bowling of Pollard. The very next ball and Pollard was on a hat-trick, McCullum cutting late, straight into the hands of Lehmann and given out after an entertaining 42. Ross and Lynn were next to the crease, Lynn smashing consecutive sixes and pushing hard for his 29 before hitting one at light speed to Pollard on the fence. Speaking to MRN Cricket, Lynn commented ‘I knew I didn’t have the height on it and mate he’s massive (Pollard) He’s probably one of the best fielders in the comp’. The Heat continued to pile on the runs late in the innings, Ross dangerous smacking four sixes and six boundaries before being bowled by Jordon and finishing with 64. After 20 overs, Brisbane 5/206.

Click play to hear all the 1st Innings highlights and analysis.

The KFC Big Bash is back in full swing and all eyes will be on the Adelaide Oval when the Adelaide Strikers play host to the Brisbane Heat.

In what’s set to be a battle of the big-hitters, the Strikers go into the game with confidence having finished on top of the league table last season and have never lost a season opening BBL match. The boys in blue have been active in the off-season and have bolstered their line-up for BBL06 with the addition of former Hobart Hurricane Ben Dunk, left handed batsmen Jake Weatherald, explosive batter/wicketkeeper Alex Carey and English all-rounder Chris Jordon.

Brisbane will be buoyed going into the match knowing they have never lost to the Strikers at the Adelaide Oval. Add to that the return of former New Zealand skipper Brendon McCullum and last seasons leading run scorer and King of the Six Chris Lynn, Brisbane will certainly be putting the heat on Adelaide’s bowling attack early, especially on tonight’s hard and fast Adelaide wicket.

Click play to hear Adelaide Strikers captain Brad Hodge with his thoughts ahead of tonight’s clash.

Click play to hear Brisbane Heat captain Brendon McCullum with his thoughts ahead of tonight’s clash.