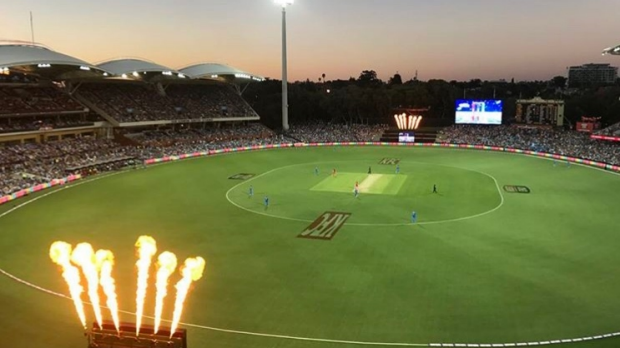 The Melbourne Renegades have survived a late onslaught by the Adelaide Strikers to get over the line and keep their finals chances alive. The game was well in hand until Jono Dean’s quick-fire 21 from nine balls nearly changed the game. Thisara Perera did the damage taking 4/25. Ben Dunk top scored for the Strikers with 32. The main story revolved around injuries as James Pattinson left the field with a possible leg injury and Brad Hodge lost control of his bat which collected wicketkeeper Peter Nevill in the head. He left the field and captain Aaron Finch took the gloves. The Renegades will now take on the Brisbane Heat at the Gabba for a shot at finals.

Click play to hear from Callum Ferguson and all the 2nd innings highlights.

After an attacking start, the Renegades lost 6/20 to collapse to a below-par 9/171 on a flat Adelaide Oval track. Marcus Harris was the star with the bat, scoring 85 from 53 balls. Kieron Pollard did the damage with the ball, taking 3/29 including two in the final over. Ben Laughlin was the pick of the bowlers however with figures of 2/15. The Renegades were unable to defend the largest score in Big Bash history last game and will need to be at their best to keep their finals hopes alive.

The Adelaide Strikers have won the toss and elected to bowl first.

The KFC Big Bash League rolls into Adelaide for the final time of the tournament tonight as the Strikers host the Melbourne Renegades. Both teams are coming off of a loss with Adelaide falling short against the Melbourne Stars while the Renegades accumulated the largest total in BBL history, before being chased down by the Hobart Hurricanes. It is a battle of the two bottom of the table sides, but both are still alive in the finals race. A loss tonight however will end their chances.

The Renegades have made one change to their squad with seamer Chris Tremain replacing Xavier Doherty. The Strikers go in unchanged, with paceman Kane Richardson failing to pass a medical test. With Chris Lynn out of the tournament, tonight will feature the next two leading run scorers in the competition as Ben Dunk and Aaron Finch attempt to keep their finals hopes alive in front of a packed Adelaide Oval crowd.

Click play to hear captains Brad Hodge and Aaron Finch with their thoughts ahead of tonight’s clash.