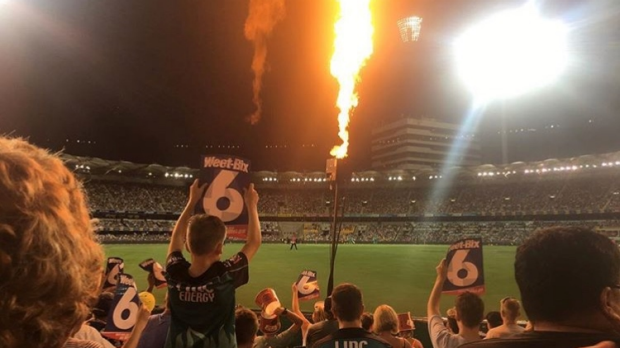 The Sydney Sixers have defeated the Brisbane Heat by 7 runs in front of 35,116? fans at the Gabba, Sydney Sixers skipper Moise Henriques named man of the match.

Click play to hear from Moises Henriques and all the 2nd innings highlights from the Gabba.

The Sydney Sixers require 168 runs for victory and a place in the KFC BBL06 Grand Final. The Heat came out swinging and set the tone early smashing a boundary off the first ball of the innings. The highlights were short-lived though, Pierson (19) and Heazlett (0) leaving the Heat at 2/40 after 6 overs, their worst powerplay figures this year. As we’ve seen all season, skipper Brendon McCullum has led from the front and that continued with Baz smashing 46 off 27 to get the Heat scoreboard ticking along until miss-timing a shot and being caught by Abbott off the bowling of Lyon. The Heat failed to pile on the big runs we’re accustomed to with Burns (20), Ross (17), Cutting (0) all failing to post big scores. Wildermuth (29) and Labuschagne (20) put on a handy partnership of over 50 to help the Heat post a final total of 167. Nathan Lyon and Sean Abbott the pick of the bowlers finishing with 4/23 and 4/40 respectively.

Click play to hear from Nathan Lyon and all the 1st innings highlights from the Gabba.

The Sydney Sixers have won the toss and have elected to bowl.

The KFC Big Bash is back at the Gabba tonight with the Brisbane Heat playing host to the Sydney Sixers in the 2nd Semi-Final. Tonight’s clash will be the first time the two clubs have faced-off in a BBL final and the first time Brisbane have hosted a home final. Both sides finished the season at 5-3 and the Sixers will come into tonight’s match full of confidence knowing they have never lost to the Heat at the Gabba, ever. The last time the two played, it was the Sixers who came away with a 3-wicket win led by Daniel Hughes’s 85 with the bat.

Both sides have made changes to their 13-man squads. For the Heat, spinner Samuel Badree returns from injury replacing Nick Buchanan whilst for the Sixers, Will Somerville makes way for Jordan Silk. Tonight’s winner will face the Perth Scorchers in Saturday’s KFC Big Bash Grand-Final at The Furnace. With a grand final spot up for grabs there’s guaranteed to be no shortage of fireworks in front of a sell-out crowd at the Gabba.

Click play to hear captains Brendon McCullum and Moises Henriques with their thoughts ahead of tonight’s clash.