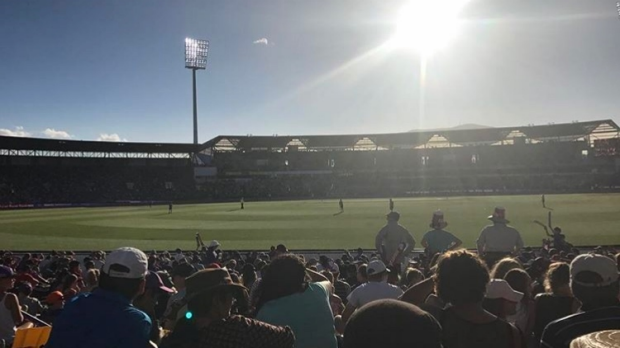 Click play to hear from man of the match Shane Watson and all the 2nd innings highlights from Blundstone Arena.

The Sydney Thunder require 162 runs for victory as they chase their second win of the season and their first ever win against the Hobart Hurricanes in BBL history. The Hurricanes posted a defendable total led by George Bailey’s innings of 69* off 54 balls which included seven 4’s and one 6. Pat Cummins and Carlos Brathwaite the pick of the bowles for Sydney snaring 2 wickets each.

Click play to hear all the 1st innings highlights.

The Sydney Thunder have won the toss and elected to bowl.

The KFC Big Bash is back at Blundstone Arena tonight with the Hobart Hurricanes playing host to the Sydney Thunder. The Hurricanes come into tonight’s match sitting at 2-3 with the Thunder at 1-4. It’s a must win match for the Hurricanes if they want to keep any hopes of playing finals alive with just the three matches remaining in their season. Coming off a defeat against the Strikers, the canes have made one change to their squad with Simon Milenko making way for experienced bowler Shaun Tait. Stuart Broad and Dan Christian (best bowling economy in BBL|06) have been in stella form with the ball whilst D’Arcy Short and captain Tim Paine (most 4’s & 3rd highest run scorer) have led the way with the bat. That form will need to continue tonight against a Sydney side that are looking to resurrect their BBL|06 season.

Reigning champions Sydney Thunder are currently sitting at the bottom of the BBL|06 ladder but will be buoyed by their performance and victory in their last match against the Stars. West Indian all-rounder Carlos Brathwaite comes into the squad replacing the injured Andre Russell and English batsman James Vince replaces Eoin Morgon. Shane Watson will need to lead from the front with bat and ball if the Thunder are to record their first ever win against the Hurricanes. There will be no shortage of fireworks in front of a sell-out crowd at Blundstone Arena.

Click play to hear captains Tim Paine and Shane Watson with their thoughts ahead of tonight’s clash.