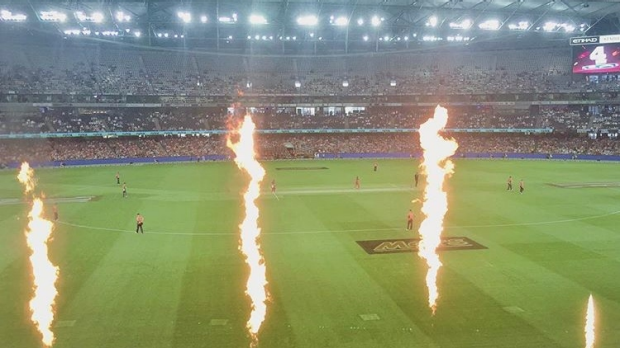 The Perth Scorchers have defeated the Melbounre Rengades by 4 wickets in front of 26,112 fans at Etihad Stadium.

Needing 149 runs for victory, it all came down to the final ball of the innings and Ashton Agar went big smashing a huge six to give victory to the Scorchers in a nail-biting finish.

The Perth Scorchers need 149 runs for victory as they chase their second win of the BBL06 season. Renegade openers Finch (24) and Harris (25) set the tone early, the duo partnering for 40 runs which included seven boundaries and a six before Finch played a miss-timed shot off a slower ball into the safe hands of Voges. Cameron White impressed smashing 37 off 29 as did Ferguson who added 28 off 21. In a low scoring affair, it was the Scorchers bowlers who stole the show, Willey and Turner the pick finishing with 2/15 and 2/25 respectively. Speaking to MRN Cricket, Mitchell Johnson was happy with the Scorchers effort ‘The thing we did really well was to take wickets throughout the middle period’.

Click play to hear from Mitchell Johnson and all the 1st innings highlights.

The Perth Scorchers have won the toss and elected to bowl.

The KFC Big Bash continues at Etihad Stadium tonight with the Melbourne Renegades playing host to the Perth Scorchers.

The Renegades won their opening match against the Sydney Thunder by 49 runs and will be looking for back to back wins when they face the Scorchers, a side they have never beaten in BBL history. The Scorchers are coming off a 6 wicket loss to the Sydney Sixers and their deep batting line-up, with the likes of Marsh, Klinger and Bell will be need to be on when they face the Renegades in form bowlers of Bravo, Hogg and Narine. It’s the first time Brad Hogg will face his old side after making the move to Melbourne in the off-season, the veteran impressing in his first outing snagging figures of 2/22. Mitchell Johnson returns for the Scorchers and is sure to come up against in-form Renegade captain Aaron Finch who was named man of the match against the Thunder, belting 63 off 37 deliveries.

Click play to hear captains Aaron Finch and Adam Voges with their thoughts ahead of tonight’s clash.