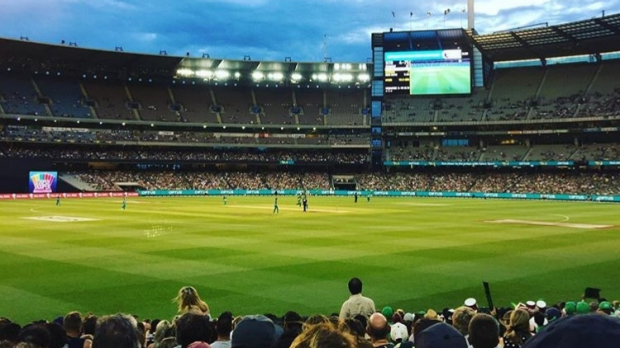 The Brisbane Heat have defeated the Melbourne Stars by 7 wickets in front of 40,225 fans at the MCG. Brisbane’s Mitchell Swepson named man of the match finishing with figures of 2/14 with the ball.

Click play to hear from Alex Ross and all the 2nd innings highlights from the MCG.

Brisbane turned up the heat early when speedster Mark Steketee picked up the key wickets of Quiney and KP in the first over of the match leaving the Stars reeling. After 6 overs and at 2/39, the Stars stabilised thanks to debutant Seb Gotch (30) and Luke Wright (60*) to finish at 138 after 20 overs. For the Heat, Swepson the star with the ball finishing with 2/14.

Click play to hear from Mitchell Swepson and all the 1st innings highlights from the MCG.

The Melbourne Stars have won the toss and elected to bat.

The KFC Big Bash is back at the MCG tonight with the Melbourne Stars playing host to the Brisbane Heat. In a top of the table clash, both sides come into tonight’s match sitting at 4-2 with a win helping secure a top 4 position and going a long way to securing a home semi-final. The Heat will be without Bash Brothers Brendon McCullum (suspension) and Chris Lynn (injury) with Joe Burns taking the reigns as skipper. Burns will look to lead from the front tonight and put in a big performance with the bat. Melbourne’s Luke Wright will play his 50th BBL game, the first to do so for the club and will want to impress in what is just the Stars second game at the G this season.

Both sides have made changes to their 13-man squads ahead of tonight’s match. For the Heat, batsmen Alex Doolan and Marnus Labuschagne come into the squad along with speedster Nick Buchanan who replaces Xavier Bartlett. For the Stars, spinner Adam Zampa, Sam Harper and Seb Gotch come in replacing Peter Handscomb (national duties), Liam Bowe and Jackson Coleman. With plenty on the line and finals just around the corner, there’s sure to be plenty of fireworks at the mighty MCG.

Click play to hear captains David Hussey and Joe Burns with their thoughts ahead of tonight’s clash.