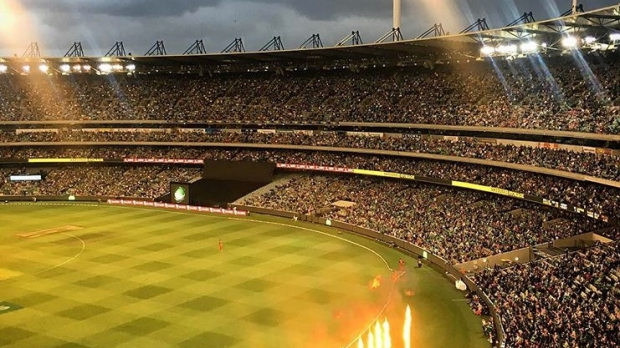 The Melbourne Renegades have defeated the Melbourne Stars by 7 runs in front of 71,162 fans at the MCG.

Click play to hear and all the 2nd Innings highlights from the MCG.

The Melbourne Stars need 172 runs for victory as they chase their second win of the BBL06 season. In front of a huge crowd at the MCG, the Renegades came out swinging, Cameron White the pick of the batsmen smashing 64 off 43 including four boundaries and two sixes. The Stars impressed in the field and with the ball, the wickets being shared around, Boland, Stoinis, Faulkner and Zampa all finishing with one. Light rain is falling at the innings break, covers have stayed off so pitch conditions will change when the Stars come out to bat.

Click play to hear all the 1st innings highlights and analysis from the MCG.

The Melbourne Stars have won the toss and have elected to bowl.

The KFC Big Bash continues at the MCG tonight with the Melbourne Stars playing host to cross town rivals the Melbourne Renegades in a New Years Day blockbuster.

The Melbourne Stars head into tonight’s clash undefeated having just played the one game so far in BBL06, a 7-wicket victory against the Hobart Hurricanes. Kevin Pieterson makes his return to team green replacing Rob Quiney (injury) and will be looking to make an immediate impact alongside in-form batsmen Luke Wright. Last time the two teams played at the G it was the Stars who shined, defeating the Renegades by 7 wickets, led by Wright who smashed 109* off 63 balls in front of a crowd of 80,883.

The Renegades come into the match sitting at 1-1, their last match a heartbreaking loss on the final ball against the Scorchers. Captain Aaron Finch has been in blistering form with the bat as has new recruit Brad Hogg with the ball. Both hold the key to a Renegade victory tonight as they’ll be without international recruit Dwanye Bravo who suffered a hamstring injury in the Renegades last match. It’s going to be an action packed contest in front of an expected record-breaking crowd at the G that will leave one team seeing Stars.

Click play to hear captains David Hussey and Aaron Finch with their thoughts ahead of tonight’s clash.