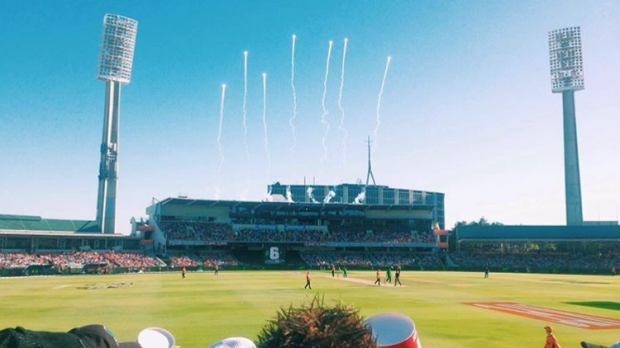 The Perth Scorchers have booked themselves another BBL Final at home with a clinical victory over the Melbourne Stars at The Furnace. Shaun Marsh carried the innings with an unbeaten 56 from 44 deliveries. Sam Whiteman and Ian Bell also contributed with 31 and 26 respectively. Marcus Stoinis was the pick of the bowlers with 1/15 from his two overs. The Stars bow out of the competition in the semi finals for the fifth time in six attempts and the Scorchers will host a BBL Final once again.

Click play to hear from Shaun Marsh after the Scorchers’ seven wicket win.

The Melbourne Stars have limped to 8/136 after Mitchell Johnson ripped the top order apart, taking 3/3 from his four overs. Seb Gotch, 48 (47), and David Hussey 26 (20) led the revival for the Stars, but they were unable to get back on track after the damage Johnson did. Every other Scorchers bowler picked up a wicket and classic catches to Ashton Agar and Shaun Marsh completed the team effort on what was a surprisingly slow pitch.

Click play here to from Mitch Johnson and all the 1st innings highlights from The Furnace.

The Perth Scorchers have won the toss and elected to bowl first.

The KFC Big Bash is back at The Furnace tonight with the Perth Scorchers playing host to the Melbourne Stars.

The first semi-final gets underway tonight at the WACA as the Perth Scorchers host the Melbourne Stars. The Stars have a great record at the venue, defeating Perth earlier in the tournament. However, they’re coming off a loss to the Sydney Sixers while the Scorchers take the momentum of a win over the Hobart Hurricanes. These two teams will be meeting in a semi-final for the fifth time, with the Scorchers winning four of those five encounters.

Marcus Stoinis returns from international duty and is joined by Dan Worrall in the Stars’ squad. Sam Harper and Cameron Gannon make way for the duo. The Scorchers take an unchanged squad into the game, but will lose Shaun Marsh to the ODI team if they make the final. Can the Scorchers add another BBL final appearance to their calendar or can the Stars end their poor run of finals performances?

Click play to hear captains Adam Voges and David Hussey with their thoughts ahead of tonight’s clash.