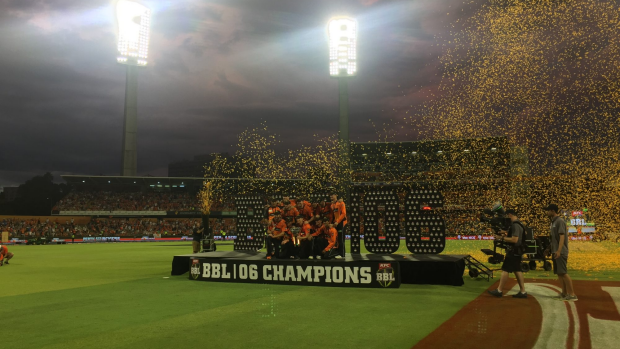 The Perth Scorchers have won their third BBL title, comfortably defeating the Sydney Sixers at The Furnace. Michael Klinger led the team to victory, with an unbeaten 71*. Sam Whiteman (41) and Ian Bell (31*) did their bit in what was a clinical performance. Nathan Lyon took the only wicket for the Sixers and was the pick of the bowlers with 1/28. The most successful team in BBL history continues to set the pace for the rest of the competition.

Click play to hear from Sam Whiteman and all the second innings highlights.

A strong bowling performance from the Scorchers has restricted the Sixers to 9/141, well below the presumed par of 160-170. Richardson and Bresnan combined for six wickets, while Mitch Johnson starred again early, taking 1/13 from his four overs. The Sixers top order collapsed, the top three combining for 14 runs, before Brad Haddin (38) and Moises Henriques (21) steadied the ship. The Sixers were unable to get their run rate above 7 as they continued to lose wickets. Johan Botha (32) dragged the Sixers to a defendable total, but Mike Hussey believes they’ll need quick wickets to have any chance of winning.

Click play to hear from Jhye Richardson and all the 1st innings highlights.

The Perth Scorchers have won the toss and have elected to bowl.

The BBL final is here and for the third time in the league’s six year history, the Perth Scorchers will take on the Sydney Sixers in the big one. The Furnace will play host to these teams for the first time this season as the Sixers triumphed at the SCG in their first encounter of BBL06. Johan Botha and Moises Henriques combined for 54 runs and will need to lead the side similarly tonight. The Sixers, coincidentally, take six different players in from that winning side while the Scorchers have a very similar team, the glaring omission being Shaun Marsh who is out on international duties.

The Scorchers have made a massive inclusion to their 13-man squad, bringing Jason Behrendorff into the mix despite the strike bowler missing the entire tournament to this point. He replaces Cameron Valente while Cam Bancroft comes in for Shaun Marsh. The Sixers meanwhile lose international batsman Colin Munro back to the New Zealand squad, leaving them with only the one overseas import. Henry Thornton replaces him in the 13-man line-up. The Sixers defeated the Scorchers in the BBL01 Final & the Scorchers leveled it at one win apiece in the BBL04 Final. Who will claim the decider tonight?

Click play to hear captains Adam Voges and Moises Henriques with their thoughts ahead of tonight’s clash.