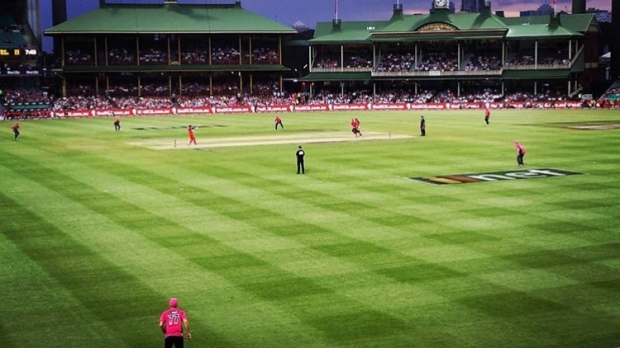 The Sydney Sixers have defeated the Melbourne Renegades by 6 wickets in front of a crowd of 30,702 at the SCG.

Sydney will be buoyed by the fact they had so many scoreboard contributors tonight; Hughes (41), Lumb (31), Henriques (30) and Haddin (31*) doing the bulk of the damage on the scoreboard and helping the Sixers jump to 2nd on the league ladder, the Renegades however have now lost two on the trot and will need to get their season back on track if they are to realise their finals aspirations.

Click play to hear from Moises Henriques and all the 2nd innings highlights from the SCG.

The Sydney Sixers require 171 runs for victory as they chase their fourth win of the season and look to secure a finals birth. Aaron Finch (57), Callum Ferguson (39) and Tom Cooper (39) doing the bulk of the run scoring for the Renegades, Ben Dwarshuis the pick of the bowlers for the Sixers finishing with 3/34 with the ball.

Click play to hear from Ben Dwarshuis and all the 1st innings highlights from the SCG.

The Melbourne Renegades have won the toss and have elected to bat.

The KFC Big Bash is back at the SCG tonight with the Sydney Sixers playing host to the Melbourne Renegades. The Sixers come into tonight’s match sitting at 3-2 with the Renegades at an even 2-2. It’s a crucial match for both sides with a win tonight going a long way to help secure a finals birth. The Sixers come into the match fresh off a 3 wicket win against the Heat with the Renegades looking to bounce back after losing by 46 runs at the hands of cross-town rivals the Melbourne Stars. Sixers Daniel Hughes and Brad Haddin have found good-form with the bat and that will need to continue when facing the Renegades flexible and potent bowling attack.

Sydney’s squad will be bolstered tonight with the return of Jackson Bird and Nathan Lyon who return from national duties with the Australian test side but will be without Jason Roy and Sam Billings who have headed to India to play for England. The Renegades have made three changes to their squad after the loss to the Stars; Tom Beaton, Thisara Perera, and Xavier Doherty coming into the squad replacing Marcus Harris, Trent Lawford and Nathan Rimmington. There will be no shortage of fireworks at the SCG tonight in the Renegades first interstate match of the season.

Click play to hear captains Moises Henriques and Aaron Finch with their thoughts ahead of tonight’s clash.