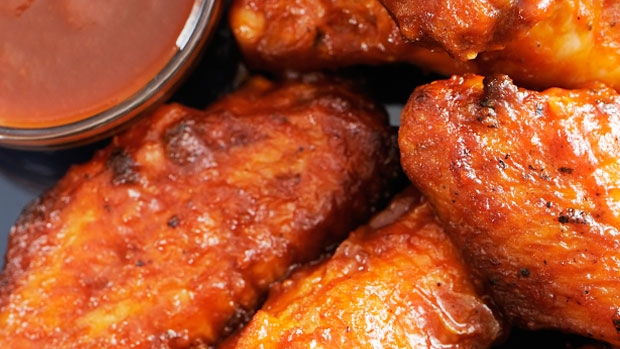 There are several versions of the tale about how and when these wings were first prepared and served, but most agree that they emerged, some time in the 1960s, from the Anchor Bar in Buffalo, New York. The bar was owned and operated by Frank and Teressa Bellissimo (and curiously, belissimo is what people often say when they taste these beauties) with Frank giving full credit, naturally, to his wife.

In the US, when they have become the go-to snack for football fans camped in front of the telly, buffalo wings consist of deep fried chicken flats and drummies – prepared by snipping off and discarding the tips of whole whicken wings and dividing the remaining section in the two cuts by slicing through the joint.

Traditionally, the wings are then deep-fried, uncoated, glazed by tossing in a mixture of butter and hot sauce, and then served with a blue cheese or ranch dip. Celery sticks to eat alongside are optional, in my view. Because celery, after all, is a vegetable…

My version, quite simply, is better than the American classic simply because all things are better barbecued (with the possible exception of soup), especially if the barbecuing also involves hickory smoke, which all barbecuing should. Try this:

? Prepare your dip: crumble a quantity of blue cheese – ideally Roquefort, but gorgonzola also works quite well – into Best Foods mayo. Try two generous chunks of blue cheese, each about the size of a golf ball, into a cup of mayo and, if you like a bit more cheesy bite than that (which I do), simply add a bit more to taste. Use a fork to mash it thoroughly into the mayo, and then thin the mixture with a generous squeeze of fresh lemon juice and mix until smooth. Cover and chill.

? Prepare a dozen wings (24 segments) as explained above, toss them in EV olive oil, and season well with sea salt and freshly-ground black pepper.

? To cook them, any decent barbecue will do the job, but I prefer them on a well-oiled, cast-iron insert grill in a Weber kettle over direct heat, or on a kamado-style barbecue, usually at something over 200 C – remembering to drop a generous handful of soaked hickory chips onto the charcoal before replacing the lid to get the barbecue smoking and then positioning the ribs on the grill and, naturally, dropping the lid. Turn them after five minutes, and again after another five. In fact, turn them as often as you like. They will cook in around 15 minutes. Ensure that they have cooked evenly and that all sides are crisp and golden.

? When the wings are cooked, place them in a large bowl and pour the butter and chilli sauce over them, tossing them to coat evenly. Lift them on to a platter to drain and cool slightly before serving them alongside the dip. Plunge them into the blue-cheese dip, eat, be amazed.

? Do not, however, move to Buffalo, which is nowhere near as cool a city as these wings might suggest.