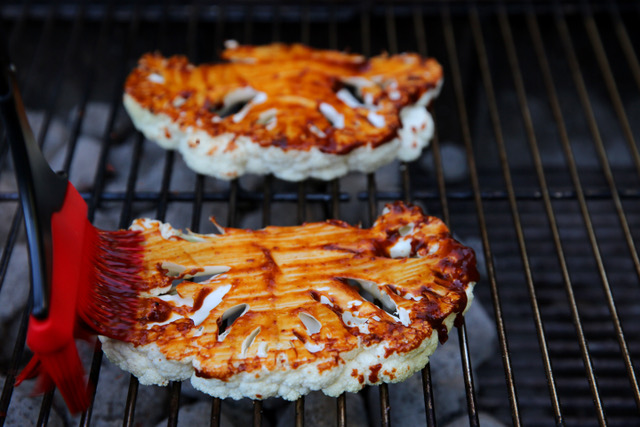 This is one of those occasions where chipotle peppers in adobo sauce – that inspired, tinned ingredient that has rescued so many barbecued dishes from mediocrity (and worse) – once again works its tiny miracle.

Consider a cauliflower steak: it is a deeply eccentric thing, bland beyond measure, sliced rudely from a leafless cauli head which has been sliced in half, vertically, and then had one, or possibly two, of these wondrous “steaks” sliced from each of its cut faces. With me so far?

The flavour of a cauli is, it must be said, less than overwhelming, although there is a gentle nuttiness to be detected at times – not unlike, of course, the nuttiness that can be detected in those would actually prefer to eat one of these to a slab of beef,
pork or lamb. But I digress…

Those of you familiar with the use of tinned chipotle peppers will already, I trust, have opened and upended a tin of them into a blender and converted all the enclosed magnificence to a glorious puree. Spoon a couple of TBS of this into a bowl, and refrigerate the rest for another use.

Add three or four pressed or finely chopped garlic cloves to the bowl, and then splash in several healthy glugs of sherry vinegar. Follow this with a generous tbs of raw sugar, ideally Costa Rican dulce, or perhaps the Brazilian or Columbian equivalent, and a handful of sea salt. Finish with a couple of generous pinches of paprika and one of dried oregano if you have it handy. Combine well into a thick and serious sauce.

Now, fire up your gas or solid fuel grill, but not too high. A PK grill, Weber kettle or any kamado is ideal for this dish as it allows you to add a healthy ration of smoke, but I confess that a gas grill – cleaned and oiled, of course – does a fine job on low
to medium heat. Start the caulis on indirect heat over coals, or a Weber Q on medium-high: holding the temp a tick under 200C works perfectly.

Now, brush each of the steaks quite generously with the sauce and place them on the grill, sauce side down, and immediately brush the second sides with the sauce.  Then drop the lid. Cook that first side in that positiion for about 7 minutes, or until it is beginning to char and soften. Then flip it, and again brush the first side with more sauce while cooking the second side for another 7 minutes or so. Flip again, and cook it some more on each side, brushing on more sauce, until it starts to become quite tender – about 16 minutes in total. Test regularly with a paring knife or a skewer to make sure. And that’s it.

Lift off on to warm plates and serve with a squeeze of lemon. And on a basic fried rice, perhaps. Quite delicious, but no … it will not be pink in the middle, and it will do nothing for a good shiraz.

In fact, if you plan to eat this as a main, try kombucha…

(Just kidding. It’s a cracker of a dish! And yummy! Honest…).