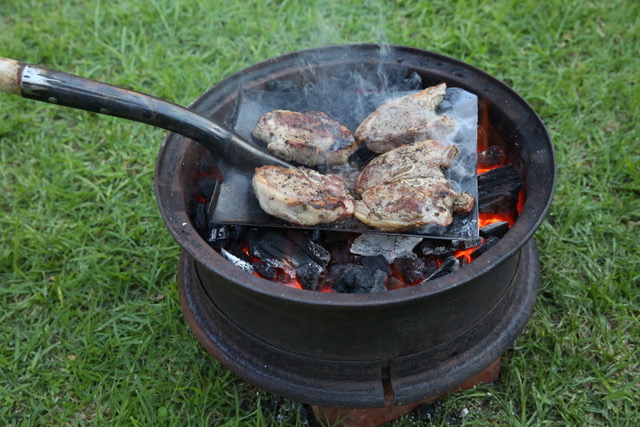 It’s all very well to describe some dishes as “barbecued” simply because there was
fire involved in their preparation. But is that enough?

Well, not to me it’s not. When we talk about barbecue flavours, we are really
talking about flavours from America’s south – flavours that had their roots in
hardship and slavery and other injustices.

Flavours that emerged as part of the ingenuity required to make cheap cuts of
meat as tasty as expensive cuts. And as things turned out, often tastier.

Is anyone really going to suggest that a fine roast of prime beef in Manhattan is an
altogether more delicious dish than, say, a humble brisket of beef cooked over
post oak by Aaron Franklin in Austin, Texas?

Because I have eaten and enjoyed both on any number of occasions and, if you are
offering me a return visit, make it Austin every time.

To exhibit the tastes of real, southern barbecue, however, meat does not have to
spend half a lifetime in oak smoke, or similar. In fact, try this simple smoke-
roasted chicken dish and you will get the picture, I promise.

There are several flavours on display here which help define those elusive
barbecue qualities: in a freshly made barbecue sauce, golden peaches in all their
sun-kissed southern glory deliver one, and wood-aged Kentucky bourbon
another, with the cunning spices used in a southern dry rub filling in the gaps.

Start by firing up your grill – for me, it will be a charcoal grill for authenticity, but
a gas grill will also do a fine job – and generously salting, with sea salt, the chicken
pieces you intend to use: it can be a whole, large jointed chicken, although I
usually prefer four marylands, say, and another four bone-in, skin-on thighs.

Leave them out of the fridge to return to room temperature after salting.
Now, move on to the peaches: for this dish, if necessary, plunge a couple of large,
ripe, yellow peaches into boiling water for just 30 seconds to loosen the skins.
Cool and peel them under cold, running water before halving, seeding and
coarsely chopping them.

Heat 2tbs of canola (or similar) oil in a pot and sauté a chopped, white onion until
golden (5-6 min); add a couple of cloves of finely chopped garlic. Continue to cook
for a minute, and then construct your barbecue sauce by adding the peaches, a cup
of tomato ketchup, half a cup of raw sugar (Dulce from Costa Rica if you can find
it), ½ cup of Kentucky bourbon (I use Woodfords), 1/3 cup of cider vinegar, 2tbs
Dijon mustard and bring to a simmer. Continue to simmer, stirring often, until it
begins to thicken (25 mins).

Transfer the sauce to a bowl and stir in a couple of squirts of sriracha (or Frank’s
hot sauce, if you prefer, for greater authenticity). Leave it to rest and to cool.
Now, back to the chicken pieces: oil them lightly with EV olive oil and dust them
generously with an all-purpose rub: mine, for example, imparts the flavours
associated with Kansas City barbecue, which is no bad thing.

Check your grill to ensure it’s around the 180-200C mark before putting your
chicken pieces, skin side down, over the heat.

After 10 minutes, turn them through 90 degrees and, after 5-10 more minutes,
flip the chicken pieces and check the thickest parts of a couple of the thighs with a
probe thermometer. You are looking for at least 75C for cooked. Also, during this
last 10 minutes of the cook, brush the chicken pieces with the barbecue sauce, and
turn them once or twice to glaze them.

And that glorious aroma that goes straight up your nose when you lift that lid?
Yep, that’s the unmistakable aroma of southern barbecue, pardner. And no, I’m
not talking about Tasmania here…