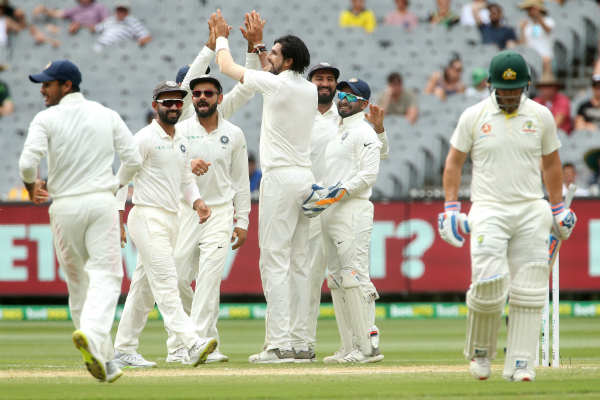 Cricket great Ian Chappell says selectors have a massive dilemma when it comes to Australia’s Test batting line up.

It comes in the wake of India needing only two wickets to wrap up a Boxing Day Test victory and take a 2-1 Test series lead after Australia finished at 8/258 at Stumps on day four.

With Australia still requiring 141 runs to beat the tourists, it’s become increasingly likely that India will hand the hosts their first Boxing Day Test defeat since 2010.

And despite a small fightback led by six wickets from Pat Cummins which saw India declare at 8/106 setting Australia a target of 399 to win – they haven’t really been in the hunt on the back of their poor batting performances.

It’s an all too common problem for Australia who have only passed 300 once so far this summer.

But Chappell says no one is knocking on the door to warrant selection.

“The problem with Australia’s batting is that you have guys struggling at Test level,” Chappell said.

“You can criticise them for getting a start and getting out, but lets be realistic about it, some of them are struggling to hold their head up at Test level.

“The problem that the selectors have got is – it’s fine to start dropping people – at this stage (Aaron) Finch and Mitch Marsh you can’t mount an argument to retain them in the next Test match – but the big question is if you drop them where do you go?

“And made more difficult for the selectors by the fact the only cricket going on in Australia at the moment is T20 cricket and the BBL.

“If they’re going to make some changes, they’ve got to make them from the BBL.

“I wouldn’t particularly want to be a selector at the moment.”

And with the Sheffield Shield season currently on a break as a result of the BBL, there are limited opportunities for batsmen across the country to press their claims.

Peter Handscomb has already been dropped, while the likes of the Marsh brothers and Aaron Finch have come under intense scrutiny for their lack of runs.

Australia play India in the fourth and final match of their Test series in the New Year’s Test at the SCG beginning on Thursday, January 3.