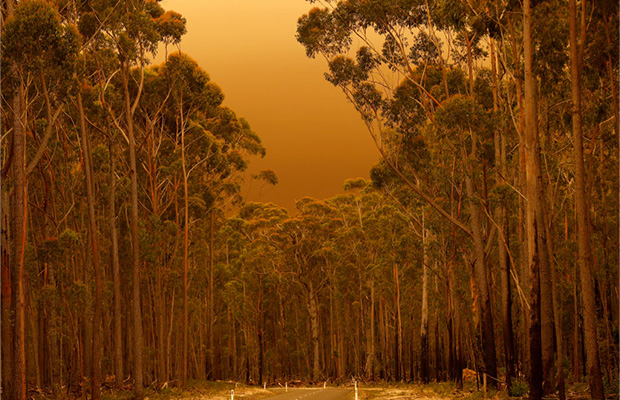 Rain has fallen in bushfire zones across Victoria’s north-east, but the falls have been too light to help firefighters extinguish the 31 active blazes still burning across the state.

A band of cloud is producing patchy rain, with about 5mm falling across affected areas.

The bureau is expecting up to another 10mm for the rest of today, but that’s only enough to make fire grounds slippery and more difficult to traverse.

At a community meeting in Tallangatta last night, Deputy Incident Controller Dave Jensen said some of the fires that started in November were even unaffected by 30cm of snow.

“The rain, unfortunately, is now hindering because it’s making it very slippery. We had an incident last night with one of our trucks, but no one was injured,” she told 3AW’s Heidi Murphy, filling in for Neil Mitchell.

But it has also offered some relief.

“It is a sense of relief for some of the crews that we’ve been able to now rotate people in and out, people can get a rest break. We’re still in there doing work where we can,” Ms Neville said.

There are still 18 isolated communities across the state’s east, but police and ADF personnel have been able to get into all but two of those communities to provide satellite phones.

“They’ve also offered, where they’ve met people, opportunities to evacuate. In this case, no one has yet taken up that offer. People want to stay where they are,” Ms Neville said.

Authorities are also trying to organise trips back into isolated communities for those who have left to assess the damage.

Local Towong mayor David Wortmann, who has been fighting the fires as a CFA volunteer, warned of a long ordeal ahead.

“We’ve got another eight weeks of potential fire,” he said.

In the north-east, convoys to deliver supplies to farms running low on fuel, food and water, were cancelled due to fire conditions yesterday. Today a convoy has set off from Tallangatta.

A convoy of trucks with vital supplies for isolated north-east communities has just left Tallangatta. https://t.co/meA2kiDAc8

The number of people missing now stands at four and two emergency warnings remain in place.

There have been 110 confirmed property losses, but Ms Neville says there is “no question” that number will rise.

Authorities have asked people wishing to help to make a monetary donation to the Victorian Bushfire Appeal, instead of donating goods.

“We have so much now, we are meeting people’s basic needs around clothing and food, and at the moment those donations are now causing issues around diverting resources,” Ms Neville said.