Campaign to oust Trinity Grammar principal takes to the streets

The campaign from the Trinity College Community to have the principal and school board ousted has gone mobile.

A truck plastered with large images of Dr Michael Davies with a red cross over his face has been spotted at the school and seen driving around the streets nearby.

Paul told Tom Elliott his son, who is in year 10 at Trinity, called him when it was parked outside after school.

“I received a phone call from my son as he was leaving school to say there was a truck with a huge mobile billboard driving out the streets of Kew and parked out the front of Trinity, calling for the resignation of Dr Michael Davies and the school council,” Paul said.

But Paul said he was unsure who was behind the stunt.

“I’m not sure, I went to one of the meetings last night and there is a fair degree of anger directed at Dr Davies.”

Tom said he thought this whole mess, sparked by former Deputy Principal giving a student a haircut, could only end one of two ways.

“Either the headmaster toughs it out and says back to business or Rohan Browne is re-instated and probably becomes the headmaster,” he said. 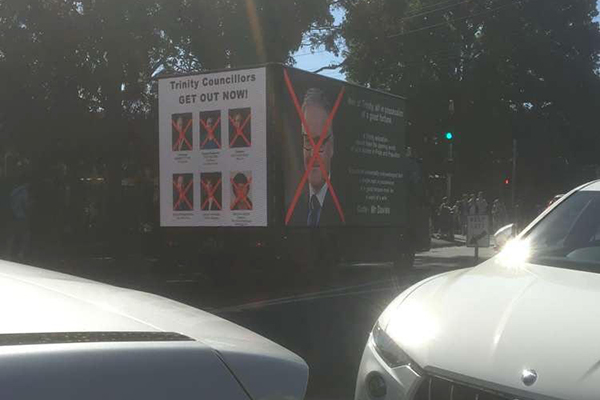