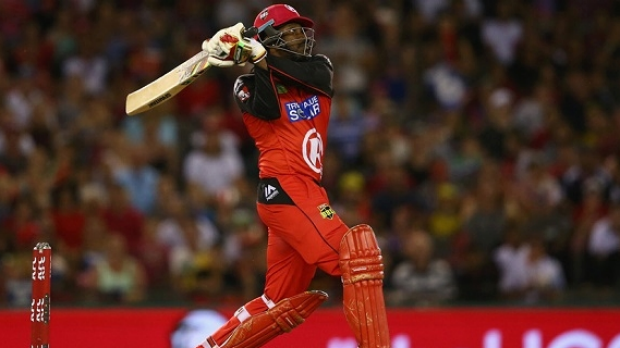 For 16 balls, the Melbourne Renegades hopes of reaching the BBL05 semi-finals were resting squarely on the shoulders of Chris Gayle.

Having been set 171 to win by the Adelaide Strikers – and needing to reach the target within 16 overs to overtake the Sydney Thunder in fourth spot – Gayle brought the crowd of 25,227 at Etihad Stadium to their feet.

He blasted 27 off the opening over of their run chase bowled by Greg West and hit seven sixes and two boundaries to reach his first half-century of the tournament.

After scoring 56, Gayle tried to send a Travis Head delivery into the stands but could only top-edge it straight up in the air where Strikers’ wicketkeeper Tim Ludeman took the catch.

Gayle equalled the world record for the fastest 50 ever scored in Twenty20 cricket, scored by Indian Yuvraj Singh in an international against England back in 2007.

He easily broke the record for the fastest 50 in the Big Bash League which was previously 18 balls jointly held by Ludeman and Brisbane Heat captain Chris Lynn.

The West Indian finished BBL05 the Renegades leading runscorer with 260 runs at an average of 32.50 and a strike rate of 155.

The Renegades ultimately fell 27 runs short, being dismissed for 143 to ensure Thunder will play in their first ever BBL finals campaign.

Remarkably, there were two golden ducks in their innings – Tom Cooper and Dwayne Bravo.

A 44-run partnership for the ninth wicket, a new record for the Renegades, between Nathan Rimmington (26) and Cameron Gannon (23) gave the Renegades a glimmer of hope that Gayle’s heroics wouldn’t be in vain.

Earlier, the Strikers showed why they’re the favourites for the BBL05 title with two strong partnerships book-ending their innings of 5-170.

After being named in the Australian Twenty20 squad earlier in the day, Head was brought back to earth after making a second-ball duck.

Spinner Xavier Doherty (2-30 off four overs) was the only multiple wicket taker for the Renegades.

Taking wickets had been the Renegades’ weakness all season – they only claimed 32 overall from their eight matches.

The win means that the Strikers finished on top of the BBL ladder for the second straight season.

They now return to Adelaide to prepare for the first semi-final this Thursday night against the Thunder.