Residents in Victoria’s Mallee and Northern Central areas are being urged to leave their homes ahead of a Code Red fire risk day tomorrow.

It’s the first time a Code Red, the state’s highest bushfire warning level, has been declared in Victoria since 2010.

Temperatures are forecast to reach a scorching 42 degrees in some parts of the state, and a severe weather warning has also been issued for much of the state.

Emergency Management Commissioner Andrew Crisp said if fires start they will be fast-moving, unpredictable and uncontrollable.

He urged those in the Mallee and Northern Country regions to leave their homes ahead of the extreme conditions.

“If you do not need to be in your home on a day like that, in an area like that, then you should not be. You should look at getting out tonight or first thing tomorrow,” he said.

A severe danger risk is also in place for the Wimmera and Northern Central areas, while the rest of the state has been issued with a very high fire risk rating.

A total fire ban is in place across the entire state. 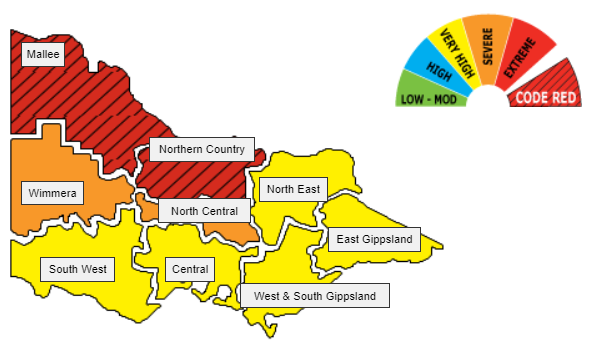 “The human hand has a part in the vast majority of fire starts, whether it’s reckless, accidental or deliberate,” he told 3AW’s Neil Mitchell.

“Accidental fires do contribute to a lot of fire starts … whether that’s driving vehicles through paddocks or grassland with high fuel loads and hot exhausts, whether its angle grinding, whether its conducting a burn off in this fringe period coming into summer. 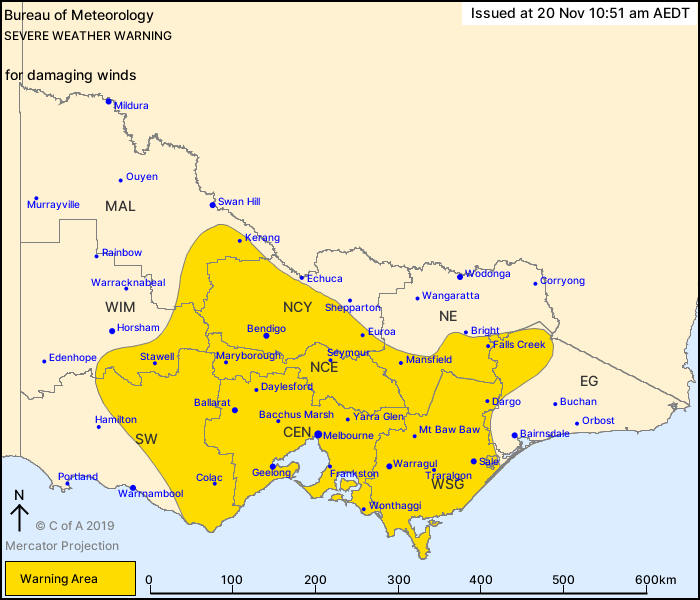 “We’re really going to have quite a strong and gusty northerly wind through tomorrow,” he told Denis Walter.

“We do have a damaging wind warning out for the Melbourne area. We could see some gust reaching up to 90 or 100km/hr.

“We are seeing fire dangers increase right across Victoria into tomorrow.”

Manangatang P-12 College has announced it will not open tomorrow due to the Code Red fire warning.