‘Chaos’: A reporter’s view from inside the conspiracy theorists’ protest 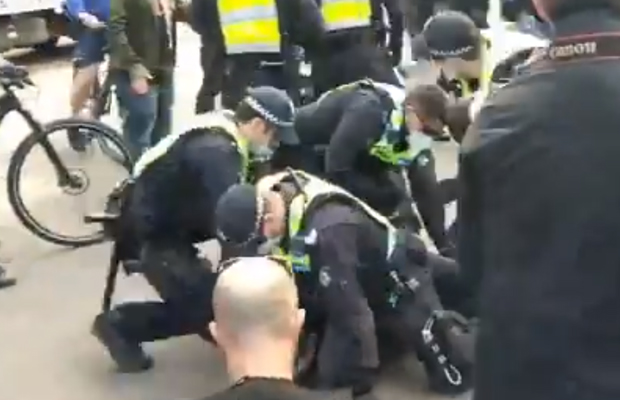 The protesters gathered under the guise of lifting restrictions but broke out in chants spruiking a range of radical fringe theories, including anti-vaxxers and the idea that coronavirus was a 1970s invention, and that “it’s all in Old Testament”.

The demonstrators a demanding the arrest of Bill Gates. A speaker has displayed a dossier “proving” coronavirus is a conspiracy theory. They’re blaming the government and the media for the spread of misinformation. @9NewsMelb pic.twitter.com/Y7PhJZNDco

A police officer is in hospital, and ten people have been arrested after hundreds disobeyed stay-at-home restrictions to rally on the steps of state parliament. @LanaMurphy #9News pic.twitter.com/H3ThRtNlnq

Tensions have boiled over at Parliament House in Melbourne – this protestor is being apprehended while oher protestors are screaming at Victoria Police @theage pic.twitter.com/kCWCdDppEv

The protest was a clear breach of health orders, prompting police to step in.

Many protesters refused to disperse, and it’s alleged several protesters then turned violent against police.

Ten people were arrested and a police officer was taken to hospital with rib injuries.

Three of those arrested have been charged with assaulting a police officer.

Police intend to use footage from the protest to identify and fine potentially dozens of more.

3AW and Nine News reporter Lana Murphy spent the afternoon reporting from the frontline of the protest.

While Victoria Police respects the public’s right to protest, the health and safety of every Victorian needs to be our number one priority at this time.

Victoria Police made it very clear that if a planned protest was to proceed today, it would be in direct contravention of the Chief Health Officer’s current directives.

At the protest on Spring Street today, police arrested 10 people, including two organisers of the event. OC spray was deployed during an arrest of one individual.

The majority of those arrested were for failing to comply with the Chief Health Officer’s directions. Three of the offenders will also be charged with assaulting a police officer, and another offender will be charged with discharging a missile after allegedly throwing a bottle at police.

All offenders were released pending summons.

As a result of the protest activity, a police officer who was in attendance has been taken to hospital for what is believed to be a rib injury.

When attending the protest today, the priority for police was to quickly arrest those individuals who were acting unlawfully and inciting others to breach the Chief Health Officer’s directions.

Once police made arrests, the crowd started to disperse.

Police are continuing to investigate the events of today in order to identify other people who were in attendance. Once individuals are identified, we will be issuing them with fines and will consider any other enforcement options.