A deaf 64-year-old man has been kicked and punched by a group of cowardly thugs in a violent assault in Frankston North.

Uber driver Ron Chapman followed a Black Holden Captiva which hit his car on the Frankston-Dandenong Road about 9.30pm on Sunday last week, eventually finding it parked in a nearby street.

Frankston CIU Senior Constable Nick Jung told Tom Elliott when Ron got out of the car to write the car’s registration details down, the group attacked him.

“He indicated that he’s deaf and he needs his book back and this male has replied to Ron with a punch in the face,” Senior Constable Jung said.

“He received some pretty deep lacerations to his forehead, there was quite a bit of blood, he couldn’t see particularly well.

“While this is going on, two other occupants began kicking and punching him from behind causing him to fall to the ground and hit his head on the concrete gutter.”

Below: The victim’s head injuries 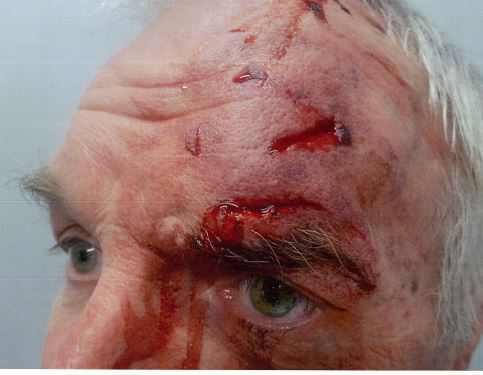 Police believe the same stolen Captiva was seen in Tootgarook last week, with the above images taken by a person who witnessed a theft.