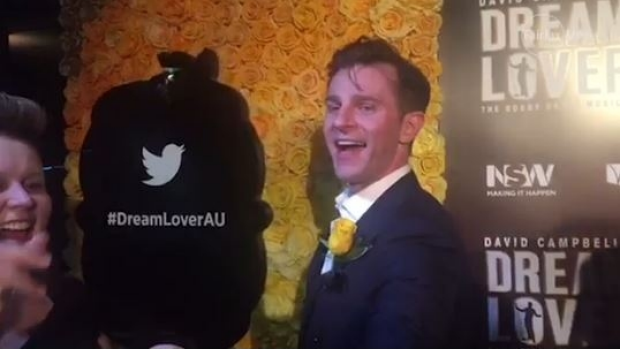 The talented and charismatic David Campbell is a huge fan of legendary1960’s singer/song-writer Bobby Darin. And it was with passion and gusto that Campbell took to the Lyric Theatre stage in Sydney for the world premiere of Dream Lover: The Bobby Darin Musical.

The show, written by John-Michael Howson and his brother Frank Howson, traces the highs and lows of the entertainer’s life, cut short by ill-health at age 37. The musical is a window into his rise to fame, his family secrets, his personal struggles and his frought marriage to Hollywood sweetheart Sandra Dee.There are more than 30 songs and an 18 piece big band on stage, playing such tender tunes as Mack the Knife, Under the Sea and of course, Dream Lover.

Campbell told 3AW, minutes after stepping off stage, ‘After 20 years of being a fan of someone who has such an emotional connection to my life and is an idol to me. And to have his son come out to give his blessing. It means everything to me.’ His dad Jimmy Barnes was in the audience, proud as punch.

The show is competing with two other productions that are classics, for vastly different reasons. My Fair Lady (directed by Julie Andrews) has just broken box office records at the Sydney Opera House and stars Anna O’Byrne as Eliza Doolittle. She’s marvellous, with a powerful voice and incredible presence as her confidence and character grows over the three hour show. Reg Livermore is delightful and bursting with energy as an exceptional  Alfred P Doolittle. British performer Alex Jennings is an excellent Professor Higgins but is to be replaced by Downton Abbey’s Charles Edwards in the Melbourne season. The costumes and choreography are gorgeous.

Meanwhile Disney classic Aladdin has audiences spellbound as they watch the Genie appear on stage at the Capital Theatre. The magic carpet is mesmerising and the ensemble a dancing, thieving, fantastical frenzy. The show, based on the hugely successful 1992 film (grossing more than half a billion dollars at the time) is fun, romantic and just the right amount of frivolous.