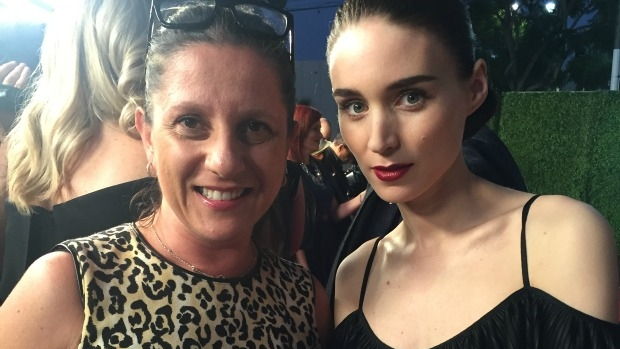 Quote of the week: ‘She is as bewitching in person as she is in film,’ says a mesmerising Rooney Mara of her Carol co-star Cate Blanchett, expressing her profound admiration for the prolific Aussie actor. Both Mara and Blanchett have received nominations for the upcoming Oscars.

We may never find out the reason Alec Baldwin pulled the pin on La Dolce Italia’s Charity Gala which was to happen at Crown later this month. The organiser’s statement says ‘it’s an unexplained cancellation’ and that they’re working on a more famous Hollywood star to replace him. The event, linked to charity Bully Zero, has been postponed until later in the year. Hmmm. I wonder if Baldwin will respond to my twitter query.

Lisa McCune’s daughter Remy was one of more than one thousand kids who auditioned for the Von Trapp children’s roles in Melbourne this week. Wonder if she will get the gig in the hugely successful musical The Sound of Music that her mother starred in as Maria way back in 1999.

Spotted: Australian supermodel Jessica Hart in fits of laughter with her fashionable mates when they ended up on the giant screens at a game at Madison Square Garden. They were ‘photo bombing’ professional golfer Jim Furyk, who was the actual focus of the close-up at the Knicks game.

Did you spot the man who officially makes the world’s best pizza on Australia’s Got Talent? The charming Johnny Di Francesco (Gradi Crown) was part of the pizza acrobatic team The Pizza Acros that performed on the Channel 9 talent show. No word yet if they get through.

Get ready for one of the zaniest and outrageous musicals ever. The Book of Mormon arrives at The Princess Theatre next year but tickets go on sale next Monday February 8. On Broadway, tickets can go for hundreds of dollars, such is the buzz around this show.

Go on have a laugh. The Doug Anthony Allstars are rivalling Farnsy for ‘farewell’ tours but it’s great to see the funny blokes are doing more gigs for the Melbourne International Comedy Festival at the Melbourne Town Hall. Two shows announced so far for April 1 and 2. They’re promising irreverent filthy faux pas, songs and social commentary.

British singer Elvis Costello wasn’t too happy with our warm weather as he visited Melbourne on a book tour during the week. Wearing a crisp black shirt, tie and cool jacket, the legendary singer was overheard expressing his dismay at how hot it gets. Perhaps ditch the jacket in Summer?

Charity of the week: Close to half a million dollars was raised for Volunteer Firefighters and Emergency services when 260 BBQ’s were held across Bunnings stores on Australia Day. Extraordinary effort by hundreds of volunteers and every single cent goes to local brigades and services. Bunnings managing director John Gillam says, ‘Thanks to everyone who bought a snag.’

Molly ? Do Yourself a Favour is the soundtrack to the TV series that will premiere this Sunday on Channel 7. We’re all thinking of Molly as he recovers from his latest injury. You can win the three CD set of incredible tracks including music from Skyhooks, Sherbet, Blondie, Split Enz, Wham! and so many more.

Also this week, you can win a double pass to the exquisite The Dressmaker Exhibition at National Trust’s Barwon Park Mansion, Winchelsea. The movie has been a huge box office success and the exhibition gives a window into the creation of the stunning costumes.  The Exhibition runs until March 11. http://dressmakerexhibition.com.au

Email ddemaio@3aw.com.au for your chance to win one of the above prizes