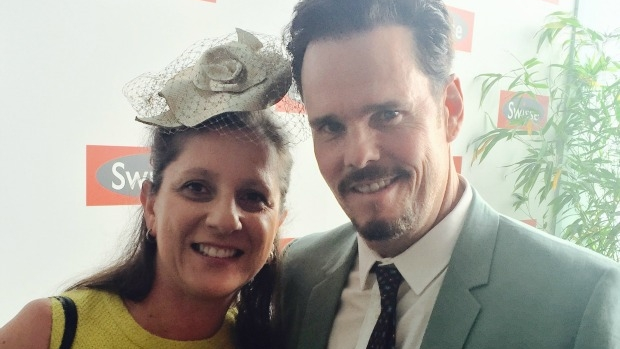 Quote of the week: ‘Oh, she used to say that about a lot of places,’ smiled Melissa Rivers when told what her mum Joan Rivers had said during the Logies in 2006.

The quip, on live tv, was, ‘I don’t know why the f**k I’m here,’ before the outrageous comedian threw a Logie award over her shoulder.

Rivers, producer of E! Fashion Police, was spotted having a great time, hanging over the balcony trackside at the Melbourne Cup Carnival as a guest of Mumm.

Spotted: Foreign minister Julie Bishop at a Mumm Champagne soiree at a private penthouse on St Kilda Road, enjoying a tipple. Caviar imported from Abu Dhabi was served. She must have had a grand time, staying on for three hours!

The new housewife of Melbourne Susie Mclean couldn’t speak highly enough of Rockpool chef Neil Perry when they bumped into each other in the Emirates marquee. She said on social media that he was ‘the foodie’s equivalent to Harry Styles’ (One Direction)

Whisper: Mumm Ambassador Lindy Klim realised she didn’t have headwear for Derby Day. So instead of going into a panic, she popped an orchid she spotted in the bathroom into her lovely locks. Smart and stylish.

Spotted: A socialite stepping into a lift after a fancy racing event, still holding a plate of lamb shank and mash, and eating with her fingers. How uncouth, some would say.

Supermodel and super gal Kate Peck stepped out with her new boyfriend, who is an Aussie but currently lives in the UK, at the Myer marquee. Hope they can juggle the long distance romance. They met at a movie premiere, which goes to show love can surprise you.

Some celebrities have such a strong constitution they continued the fun at a variety of after-parties. Spotted at The Deck at Circa: Liesel Jones, Megan Gale, Jo Hall, Dan Macpherson and Chris Judd.

Trainer Gai Waterhouse declared at the Crown Oaks Day lunch (attended by 1300 women and about five men) that she does not own tracky-daks, only has one pair of jeans and can’t train without lipstick on.

It was a difficult week to convince some people to chat to the media, most of whom are paid handsome sums to attend the races.

Lady Kitty Spencer, who extended her stay by several days after she had a grand time at the Melbourne Cup, seemed uncomfortable with questions about her late auntie Princess Di.

US actor Hilary Swank snubbed most of the media pack that had waited 90 minutes for a few brief words, delivering only a quip about the designer she had chosen to wear.

And new Davis Cup captain Lleyton Hewitt looked directly at me to declare he wouldn’t be chatting.

All my ‘chatting to the media’ brownie points are this year awarded to Entourage star Kevin Dillon (Johnny Drama) who posed for so many selfies, he may have set a new record at Flemington.

He was friendly, charming, interesting and loads of fun for all (media and general public alike). Good on him. Victory.

Charity of the week: Hawks Premiership player Jack Gunston will be selling Cup Carnival pins to raise money for the Starlight Foundation. He told me that after spending time with a young and very ill boy Alex, whose wish was to meet the footy team, he wants to give back.

Terminator Genisys is out now on DVD. Arnold Schwarzenegger is back in a thrilling action movie that tells of the war of man against machine. Australia’s Jai Courtney also stars with fellow Aussie Jason Clarke – who has been critically acclaimed for his role as resistance leader John Connor.

You could win a DVD copy (with bonus extras) of the film Terminator Genisys (Blu-Ray DVD RRP $39.99) by emailing ddemaio@3aw.com.au Please include postal address. Thanks!