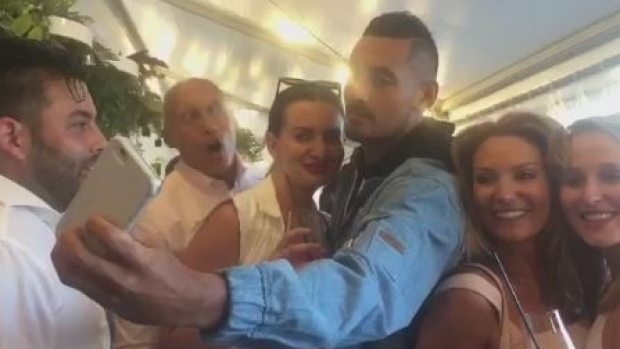 Quote of the week: ?My dad got married a few weeks ago and I had the kilt then but I don?t travel with one around the world, no,? says World Number one Andy Murray.

Murray offered that response to a query about kilt-wearing at a charity event at the Langham Hotel. The Scot, as an Ambassador for UNICEF, had a hit out on a specially laid tennis court with a group of excited children. The 29 year old also met with Australia?s U12 tennis champion Amor Jasika, who was pleased to meet one of his tennis idols.

Surprise guest of the week: Super confident controversial cricketer and flash dresser Chris Gayle took in the view at the IMG Tennis player?s party at Crown?s rooftop at Studio 3, and happily pocketed at least one phone number from an eager female. He gleefully posed with countless keen admirers throughout the event after being invited as a plus one by cricketer Kevin Pietersen.

World number four Stan Warwinka was keeping himself tidy at the IMG tennis player?s party. ?You need to be careful what you doing before, hopefully the big party you have after the tournament.?

?It?s my second favourite sport next to racing,? says Melbourne Cup winning jockey Michelle Payne about tennis. She was one of the stayers at the player?s party, enjoying a good mingle.

Also at the party were a hungry Pat Cash (he muttered ?where?s the food? on his arrival) and Nick Kyrgios and his enormous entourage.

Olympians love the tennis. Cate and Bronte Campbell were spotted having a hot brew at the Lavazza marquee while prepping for a big day courtside. They were later thrilled to bits to meet Rafael Nadal after his winning match.

A fan meet and greet is planned this afternoon with Aussie legend Pat Rafter at the Medibank Play Park.

Rock legend Ross Wilson and Jon Stevens were enjoying the luxe hospitality of the Emirates marquee, after a tremendous first round win for Novak Djokovic. The singers had earlier performed for the masses at the live music stage but sadly missed Daryl Braithwaite who had to cancel due to ill health. Braithwaite is hoping to recover soon.

Meanwhile The Project?s Tommy Little seemed to be comparing comedy notes with mate Ash Williams in the Emirates lounge. Little has revealed he is writing material for two shows for the upcoming Melbourne International Comedy Festival including a comedy/music show with his singing colleague Gossling.

Spotted: There?s always going to be a visit to famous eatery the Flower Drum by a notable visitor. Seen enjoying classic Chinese fare was former fiery champ and commentator John McEnroe, according to 3AW?s Rumour File.

Fans have been lapping up the new zones at the Australian Open Grand Slam Oval, with many appreciating the four themed areas including the Paris Quarter. One of the most popular spots for people watching has been the The English Club Section, complete with pretty swing to perch on and relax. The other fun area is NYC streets where you can personalise your Nike wear and grab a hotdog.

Who?s a proud dad? Channel ten newsreader Stephen Quartermain was naturally pleased when his daughter managed to meet the legend himself , Rod Laver, during a trip to the Australian Open. He posted the pic on social media.