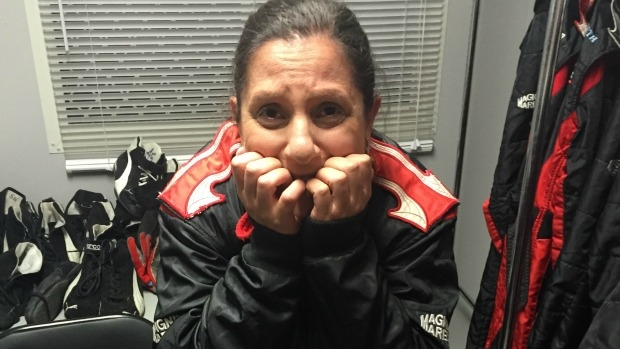 As I write this I feel nauseous. I have just stepped out of the Formula One Grand Prix Swisse two seater at Albert Park where my driver Zsolt Baumgartner reached speeds of 300 kilometers per hour.

I have covered 20 Grand Prix in Melbourne for 3AW and today I got a ride. Today, I also felt fear.

In order to mentally prepare for the two fast laps, I spoke to others who had already had the experience. One warned of getting a severe headache afterwards, another described the extreme neck pain but all insisted I must do it.

As soon as I got kitted out in the fire proof gear and driving suit, I needed to find a bathroom, twice in twenty minutes.

I was third after Channel Nine’s Clint Stanaway and 3AW’s Sam McClure. Within minutes, Stanaway’s car crashed and all went quiet. The medical team checked on the pair and they were fine however the car lost a wheel, completely.

Stanaway told me, ‘We bashed into a wall, then another wall and then another. I thought – is this going to catch on fire?’

This incident did not settle my nerves.

A kindly fellow gave an impromptu safety talk which involved telling me that if I really want the ride to stop, kick the driver. Still not sure if he was kidding. He also urged me to try not to vomit.

Yes, I still got in the car despite the Stanaway bingle. The voice of every rev head I have ever encountered was echoing in my mind – ‘what an opportunity.’

Pulling out of the garage, Zsolt was advised by Minardi owner Paul Stoddart to take it easy. I don’t think he heard.

Zipping down the straights, breaking into the corners and reaching ridiculous speeds, I emitted yelps that developed into tiny screams. My face felt frozen in place and I couldn’t believe it was actually happening.

I tried peering out to see more of the track. Bad idea. Very bad idea. I tucked my head back in and repeated my mantra – ‘relax’ as trackside signage flickered past.

I also got very hot and dry reached. Then I had a passing thought for the bloke I had met trackside. He told me that he’d bought his ride for 1950 dollars at a charity event.

An hour later and I still feel nauseous. There was Gatorade and an offer of anti-nausea tablets from the medical officer. It was incredible, exhilarating and super fun.

I also now know how it feels to be scared witless.