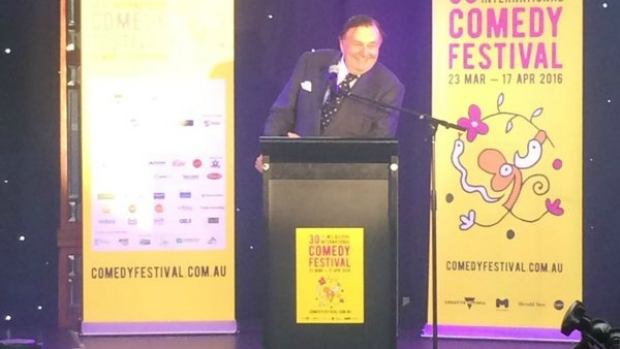 Quote of the week: ‘Very happy to be back in my home town,’ says Barry Humphries who at the age of eighty-two still enjoys his satirical observations. ‘I was on a bus that talked about Chadstone as the foremost fashion centre. Chadstone. Who would have believed it. Next year it will be Hoppers Crossing,’ he mused.

The comic legend was spotted have a quiet chat with hilarious comedian Sammy J ahead of the announcement of the Melbourne International Comedy Festival Barry award nominees.

Barry Humphries at the Melbourne International Comedy Festival this week

Sammy J, who usually entertains with brilliant side-kick Randy, told me he’s working on a solo show for this year’s Fringe. I asked his toddler daughter if daddy made her laugh. Her response was, ‘sometimes’. LOL.

Kylie Minogue and Guy Pearce are making a movie together. There will be no reference to their time on Neighbours ? well maybe just one. The comedy is called Flammable Children, written and directed by Stephan Elliott (Priscilla, Queen of the Desert) and set in 1975 during the so-called sexual revolution. Cameras will roll on the south-east coast of Queensland from early October.

The invites are out for a snazzy launch party, confirming Gina Liano has named her perfume Gina. You could say her popularity and notoriety stemming from her casting in the Real Housewives of Melbourne has helped her join the likes of Madonna and Kylie in becoming a ‘single name celebrity.’

By the way, the finale of this season’s Real Housewives of Melbourne (airing May 01 on Foxtel) reliably has fireworks, showdowns and a series of catty exchanges. Swear words and name calling abound in the final minutes.

Such a romantic. Hugh Jackman popped a photo of he and wife Deborra-Lee Furness on their wedding day on social media to mark their twentieth wedding anniversary.

Hugh Sheridan is busy hanging with his mates The Rock, Zac Efron, Rebel Wilson and Kevin Hart at the MTV movie awards in Los Angeles and bothers to mention that he’s partying in his trusty, stylish black suit by Melbourne’s own Dom Bagnato. What a thoughtful guy!

Megan Gale adores her Dolci Firme shoes and designer Bianca Buccheri is pretty chuffed about that. Buccheri is celebrating twenty years in the shoe biz, showcasing her Made in Italy winter range in Armadale this week. The talented and stylish gal is so modest she nearly forgot to tell me that super model Helena Christensen has worn her shoes. Naturally.

Three blokes walk into a bar. The Masterchef posse of George Calombaris, Gary Mehigan and Matt Preston popped by to see Melbourne entrepreneur Grant Smillie at his pumping bar/restaurant EP & LP in Los Angeles. Smillie is thriving in La La Land with his West Hollywood venue one of the most popular places to eat and drink. A place that Al Pacino is known to frequent.

Human Nature have also fared well in the US with their long term residency in Las Vegas. They were thrilled and honoured to perform the US national anthem this month at the Major League Baseball game between the Chicago Cubs and New York Mets.

Charity of the week: Good people eating good things across May will help Sacred Heart Mission. Some of Melbourne’s finest chefs including Jesse Gerner (Bomba) and Adam Draper (Donovans) are supporting Dine With Heart Month. The event is a chance for participating restaurants and cafes to raise money for meals programs. Did you know Sacred Heart Mission provides free meals to four hundred needy people every day. More info: sacredheartmission.org

THIS WEEK’S GIVEAWAY: Mothers’ Day is on its way. This week’s giveaway is a cool and colourful Smash Prize Pack from the Limited Edition Love Mum range, exclusive to Coles. It includes an insulated lunch bag, umbrella and cosmetic purse. A perfect gift to show Mum you care. Email ddemaio@3aw.com.au for your chance to win!