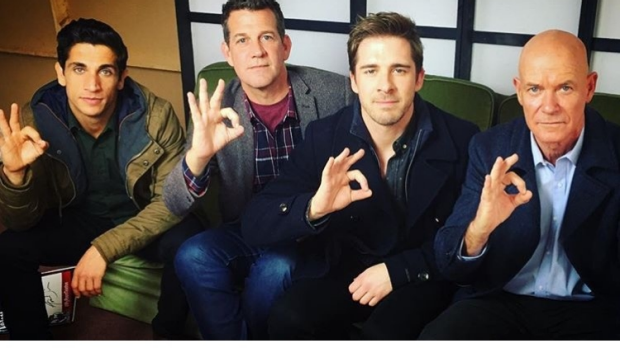 Quote of the week: ‘Frank and I used to use s**t as an artistic premise and they don’t use that in music theatre. They use discipline and hard work. It’s a whole new, challenging world but extremely satisfying, says Colin Lane who is treading the boards in The Production Company’s Curtains.

Lane (Lano and Woodley) explains he’s on a ‘steepish learning curve’. ‘As opposed to comedy, there’s a fourth wall, which is slightly scary, so if you make a mistake you can’t tell the audience that you’ve made a mistake, which is what I’ve built my career on.’

He’s working out to stay focused says Adriano Zumbo, the host of new Channel 7 show Zumbo’s Just Desserts. The show had a strong debut with more than one million viewers but dropped to a figure of 830,000 on day two. Zumbo is jetting overseas for a break and to attend a friend’s wedding while Australia decides on whether to get hooked on another cooking reality show.

Kate, one of the show’s contestants, revealed didn’t audition for Zumbo’s Just Desserts but producers appeared to have held on to an old MKR audition from a couple of years ago after being impressed with the bubbly Ballarat gal.

Meanwhile Masterchef’s George Calombaris is making his parents proud. After a super busy year, he’s taking a holiday (with family) while squeezing in a TED talk in Greece. He told me his presentation next month will be based on ‘saving Greece’. He’s planning on leaving his phone at home and really switching off for a well-earned break. Calombaris this week charmed a room full of guests at the Visit California event at the Noisy Ritual Urban Winery in Brunswick East, regaling the gathering with his tales of fun while filming Masterchef with the gang in California.

One of his favorite memories, from a man who freely admits he’s anti-sightseeing, was seeing the San Francisco Golden Gate Bridge. He also alluded to some big nights out (did someone mention Soho House?) with his mate Curtis Stone who recently opened Gwen, his second Los Angeles restaurant.

Classes with etiquette queen June Dally-Watkins were a birthday gift as a ten year old, so presenter Ash Pollard (MKR) knows how to behave in public. The chatty one popped up at two major launches: The Tokyo themed stylish event for The Fifth Watches (stylish limited edition pieces released on September 5th) and the Diesel new season party (the 80’s and embroidered bomber jackets are back) in Chapel Street. Pollard is busy working on her Yahoo 7 spot, which includes her insights into deportment and manners, as well as some famous peeps interviews.

Australian directors Bentley Dean and Martin Butler are thrilled that Australia’s official submission for Best Foreign Language film Academy award is their movie Tanna. They worked with the people of Yakel (Tanna Island, Vanuatu) to create a cinematic translation of a song about two lovers who defied the ancient laws of arranged marriage. The film is about to release in US cinemas and the ‘Kastom'(culture) on the island has now been changed by the villagers.

Hugh Sheridan has sat down with House Husbands cast mates on set to talk about a new social media initiative to combat depression amongst our community. Gary Sweet, Firass Dirani and Rhys Muldoon all gave the ‘okay’ sign to support the campaign. Sheridan says ‘Everyone gets depressed, it’s how we cope that matters.’ #itsokaytotalk

Of course we should celebrate the establishment of our gorgeous city, with the official party on August 30 ? also known as Melbourne Day. Artist Vincent Fauntauzzo is pleased with his contribution to the celebration with a #30portraitsin30days exhibition at 101 Collins Street. Portraits include Matt Moran, the Edgerton brothers, Bob Hawke, Ron Barassi and of course his wife Asher Keddie.

The best Elvis impersonator (I have ever seen) Max Pellicano has had more comebacks from ‘retirement’ than I can count, but that’s okay – because the American singer is extraordinary. He performs at The Palms at Crown this Friday and Saturday. The King lives. Trust me.

Congratulations to The Langham, Melbourne, which has been voted number one Top City Hotel in Travel and Leisure’s 2016 World’s Best Awards.

How do you celebrate surviving 40 years in the music industry? With a massive national tour, of course. Icehouse are heading around the country, playing some of the most beautiful music ever written. The band started as Flowers and played to a crowd of about 30 in Warriewood. Amongst many, many gigs (including New Zealand) will be a performance at The Red Hot Summer Tour in Bendigo and at One Electric Day at Werribee Park next year.

Charity of the week: Mimco has partnered with Our Watch – a not-for-profit organisation dedicated to preventing domestic violence. There’s a new collection which sees 100 per cent of profits going to training and education programs. The objective is to end domestic violence, as the campaign urges everyone to stand up and speak out. #bepartofthechange www.mimco.com.au/our-watch