Donna Demaio’s Gossip Sheet: How to gain six kilos in one week! 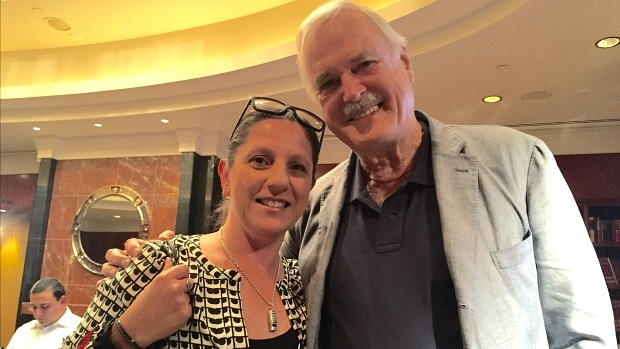 Quote of the week: ‘The world is such an extraordinary mess. I mean what can you say about Trump? You cannot be funny about Trump. You see what I mean? Because you can’t be more ridiculous than that,’ was the response from John Cleese when asked about the US presidential candidate.

Cleese was in Melbourne to announce that Stephen Hall had landed the role of Basil in the stage version of Fawlty Towers. Cleese, who’s writing and directing the show, will return three weeks before the world premiere in Sydney to tweak rehearsals.

Anthony Callea has gained 6 kilos in a week since returning from the South African set of Channel Ten’s ‘I’m a Celebrity, Get me out of Here’. He ate 15 lamingtons on the day of his return and three pastries. His partner Tim Campbell threatened an intervention, he told me. Callea says he lost four kilos during his tv journey and now hovers around 62 kilos.

Arnold Schwarzenegger couldn’t stick around for more than about an hour at the Grand Prix but before disappearing he had a lengthy chat with a local photographer. What did they talk about? Well it appears a cousin to the photographer is Arnie’s hairdresser. Seems talking follicles was allowed, just not politics or family relationships.

Nipple gate. Which radio broadcaster was flummoxed and just didn’t know where to look when an interviewee accidently flashed a breast during their on air chat?

Super model and MTV goddess Kate Peck is heading to London this week to meet up with her beau who works in the finance sector. The long distance relationship has worked well so far but as she put it, ‘It’s going really well but one of us is going to make a tough decision soon. Who knows which one (of us) it will be.’ She’s also thrilled that her super slick Kate Peck edition ‘aviator’ sunglasses ( Local Supply) are now available through General Pants

Eddie Perfect is finding inspiration for his next project by ‘banging his head on his piano all day’ he told me. He also reviewed the magnificent Matilda the Musical live on 3AW from the opening night. ‘The audience actually stood up, which is quite rare for a Melbourne audience. They went crazy. Matilda ticks a huge amount of boxes. It’s really cleverly written. The music and lyrics are super smart. And there’s an army of talented children.’

I watched the standing ovation on opening night at the Princess Theatre and figured that quite simply, Tim Minchin is a musical god.

On his arrival on the red carpet, Minchin mentioned that his passion for Melbourne developed after he moved here from Perth. ‘It’s the place where in the four years before things starting going well for me, I was pushed to try and find something new because I was floundering. And all those people like Eddie (Perfect) around that era made me realise that my compulsion to write satire was valid.’ He also mentioned he’d been surviving on rice and gravy during that time.

When Justin Bieber is spotted in your label’s t-shirt, it’s definitely cause for excitement. Silvana Philippoussis and her hubby, former tennis star Mark, have a casual wear fashion label called Phlip Apparel and have posted ‘Who wore it best’ pics of themselves and the Bieb on social media wearing the cool, white v-neck t-shirt.

Spotted: Two large, ‘people mover’ vans with darkened windows and a stretch limousine parked outside City of Ink in South Melbourne on a sunny Melbourne afternoon. Camera crews were also swirling, jumping out of the vans.

Channel Ten newsreader Candice Wyatt is heading to India to hang with her cricket playing beau Glenn Maxwell. Wyatt has signed off her duties at Ten for a few weeks as she experiences life on the road with a touring sportsman.

Charity of the week: Now in its third year, Excellent Thursday, is hosting a 100-person lunch on March 24th at Eureka 89 to raise funds for TLC for kids which helps those children who fall through the gaps, including sufferers of accidents, burns, abuse and rare illnesses. TLC for Kids. All who gather will eat a wonderful meal while helping those in need. To book: http://www.excellentthursday.com/