Donna Demaio’s Gossip Sheet: ‘I’d like to thank my mother for my boobs’ 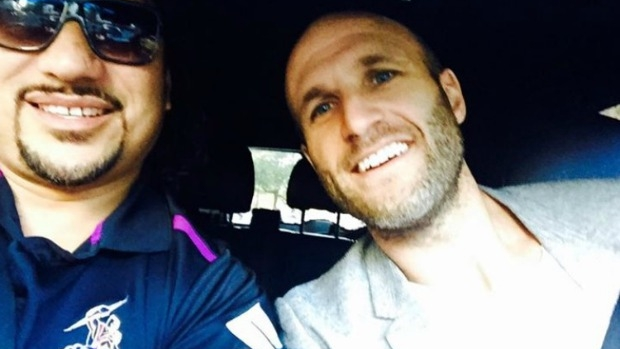 Quote of the week: ‘I’d like to thank my mother for my boobs,’ said Gina Liano as she whipped through a list of all her supporters as friends, family and fans gathered to help launch the ‘Gina’ fragrance.

The Real Housewives of Melbourne star was virtually mobbed at Ms Collins in the CBD, with the event becoming a selfie frenzy. Cool canapes, glam gowns, a confetti bomb and a giant bottle of perfume perched on the bar made it a perfectly fun launch party.

Billy Brownless wiping down tables and Nick Riewoldt serving trays of beef brisket. This is what was happening when the legendary chef Kevin Bludso held a masterclass at his San Antone by Bludso’s BBQ restaurant at Crown. The footy boys were eagerly helping out and picking up cooking tips as Kevin revealed the secrets of the melt-in-your-mouth meats that he’s perfected over the years. The place was pumping on a Tuesday night. Riewoldt, married to a Texan, spoke of his love of smoked meats and declared, ‘I’m wearing my Texas belt’ in honour of the international guest.

A good deed was done when local musician and kindly fellow Tony Kopa noticed Chris Judd, stranded and searching for a cab in Richmond. Kopa called out to the Carlton great and offered him a lift. Hilarity ensued as Judd accepted the lift, took a selfie during the ride (see above) and generally had a great natter with his saviour and new best buddy. As Kopa said, ‘Lovely down to earth gent, openly talking about missing footy and his challenge to keep busy so he doesn’t think about it.’ By the way, I do believe Judd will be busy enough when the twins arrive to make it a family of six.

Modern Family star Ty Burrell is heading to Sydney for Disney Pixar’s Finding Dory, which opens on June 16. He voices the character of Bailey, a beluga whale. I hope he’s improved his red carpet manner since last time we met at a glittering event in LA. He was ‘too busy’ to talk to Australian media on one of the shortest red carpets in entertainment history. Pardon? No comment.

Exciting news as it’s revealed the headline act for the Deniliquin Ute Muster is Keith Urban. Apparently, the organisers ask their audience who they’d like to see at the event and Urban has been top of the wish list for ages. The muster is on September 30 but there’s already a hashtag #DeniGoesUrban. Other performers include Shannon Noll and Adam Brand. Urban is headlining at the MGM resort in Las Vegas in October then heading back for an Australian tour in December including Rod Laver Arena. Legend.

Shoe stores across Melbourne are bracing for the storm of shoppers looking for the ultimate Logies‘ footwear. There is a growing focus on accessories, as famous peeps try to get noticed at the big TV awards night. Hugo Sheppard at Melbourne Emporium, Dolci Firme in Armadale, Myer and David Jones are showcasing some snazzy, designer heels. Remember, it’s a long night, so comfort need be considered.

Rebecca Maddern will be wearing these beauties at the Logies.

‘It’s a walk in the park,’ said Shane Delia as he greeted the 80 or so guests streaming into his city restaurant Maha for the inaugural Women of Melbourne luncheon. It was a brilliant event that brought together tv stars, businesswomen, socialites and women from all walks to raise funds for the YWCA. Former Queensland Premier Anna Bligh was an exceptional guest speaker and spoke of the need to end domestic violence. www.ywca.org.au

Delia, by the way, was clean-shaven for the first time in about a month. He’d grown a well-groomed beard to mask an evident cold sore ahead of some filming. He’s now been ‘advised’ that due to continuity considerations for other work. the beard had to go. His wife Maha is thrilled.

Rocket Zot, now aged one, walked at ten months says proud mum Lara Worthington, speaking on Today Extra on Channel Nine about her new role with Dior. Worthington spoke of her desire to keep her private life private and then spoke of her baby, her marriage (she cooked a roast for her own intimate wedding of around ten people) and that things have changed now she’s not young any more. She says her wedding was ‘super chilled.’ ‘I would love to have another child,’ she also revealed to hosts Sonia Kruger and Ben Fordham. And she’s going to the ballet with her mum this week. Riveting.

Tweet of the week goes to Gold Logie nominee Lee Lin Chin. A tweet from a follower read – ‘Hey! I think I just saw you!!!! Are you in Haymarket at the moment?’ Her response – @LeeLinChinSBS ‘No, I’m in Hong Kong. So it looks like you’re a racist.’

Spotted: Olivia Anderson, (blogger and wife of Shane Crawford) having a leisurely browse at Mozi at Melbourne Central with a gal pal. The gift store hosted a darling mother’s morning tea to make mum’s feel spesh and showcase the incredible range of gorgeous products. Did someone say scented candles?

THIS WEEK’S GIVEAWAY: Mother’s Day is, yes, just days away. ‘Things My Mother Taught Me’ is written by author Claire Halliday. The book has thoughts and reflections from the likes of Miguel Mestre, Greg Fleet and Shaynna Blaze (rrp 29.99). For your chance to win, just email ddemaio@3aw.com.au