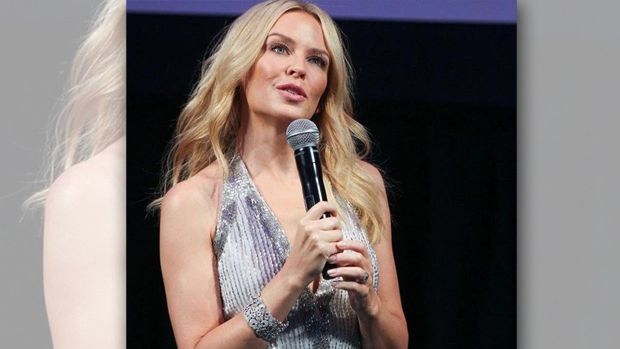 Quote of the week: ?I hope I?m not going to be that woman with 18 cats,? says Kylie Minogue as she admits to being a bit of a hoarder.

Kylie unveiled the Arts Centre?s Kylie on Stage exhibition which features iconic stage outfits donated in instalments over her glittering three decade career. However, the singer admits she still can?t bear to part with the famous gold hot pants that cost her  50 pence, many years ago.

@artscentremelbourne are ready for YOU!!! ??Come and get up close and personal with a number of my concert costumes!! #kylieonstage ?

Imagine an awards night hosted by the creative genius that is Tim Minchin. The writing/musical god will helm the Australians in Film awards night in Los Angeles on October 19. Actor Jai Courtney (Suicide Squad, Jack Reacher) and director Garth Davis (Top of the Lake, Lion) will be honoured at the glam event which celebrates rising Australian talent in the entertainment industry.

Spotted: Real Housewives of Melbourne Chyka Keebaugh (yes, she?s left the show) and Susie McLean purring over the sustainable and stunning Sassind label merino wraps and cotton lounge wear at caf? of the year Higher Ground in the CBD. The women joined a swag of fashionable gal pals and Sassind founder Tamara Ryan to talk comfort and style. They pair both fell in love with the pale blue merino wrap. Let?s hope the fashion faux pas of wearing the same thing to the same event doesn?t eventuate.

Jimmy Barnes admitted to the crowd at the ONJ gala dinner at Crown at the weekend that he agreed to sing at the charity night, partly because he wanted to duet with Olivia Newton John. His wish came true with a joyous rendition of ?Your love is lifting me higher and higher?. Livvy came out wearing a black leather jacket over her cream-coloured sequin full length gown. So rock-n-roll.

Channel Ten has scooped up some fresh faces to present ?A Taste of Travel? which returns to the small screen this Saturday afternoon at 4.30pm. One of the newbies is journalist Susannah Guthrie who was asked to audition for the gig and came out a natural. She excitedly squeezed in trips to places such as New York, Los Angeles and Bali.

Spotted: Actor Vince Colossimo at a screening of The Space Between at the Italian Film Festival.

Whisper: Chadstone Shopping Centre is continuing to grow, with word that it?s planning an international shopping festival next year. Meanwhile, there could be plans for extended shopping hours. Once the cinemas open in mid-October, imagine if the stores stayed open on a Saturday until 9 pm. Just sayin?.

Quality time with his six year old son Ethan is what model/presenter Kris Smith is concerned with this week. Smith has just returned from the Burning Man festival in Black Rock Desert, Nevada in the US, raving about the event which has a philosophy of communal effort, inclusion and self-expression.

David Campbell has gone vegetarian and taken to social media to laud the taste of radishes. The singer is deep in rehearsals for Dream Lover ? The Story of Bobby Darin ? with an 18 piece orchestra and 40 on stage, which opens next month at the Sydney Lyric Theatre

David Campbell will appear as Bobby Darin in Dreamlover

3AW nightline presenter Simon Owens is overwhelmed with the support for this Saturday?s event to raise funds for the local basketball team Mitchum Thunder at a trivia night at Box Hill Town Hall. Owens is hosting the event. There are six tickets to the footy show, a Peter Hitchener hosted tour of Channel Nine, an afternoon at 3AW with Tom Elliott amongst auction items. But the donation that really impressed: Daryl Somers has personally donated a massive collection of Hey Hey It?s Saturday stuff including the board game, T-shirt, cap, DVD?s and two pluck-a-duck soft toys. Wow. Contact: clloyd@mitchamthunder.com.