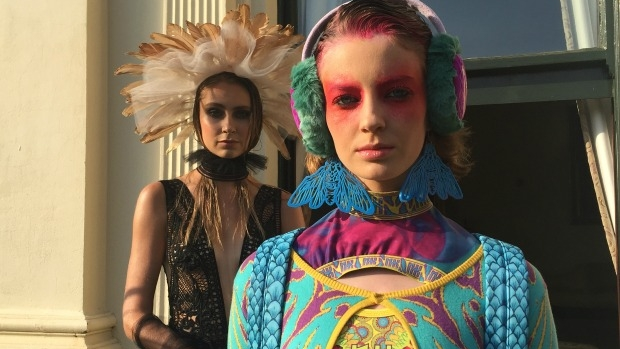 A dilemma arose for Victorian Governor Linda Dessau – deciding what wear to the opening party of the Virgin Australia Melbourne Fashion Week at Government House. She joked to the 500 guests that her predecessors would have simply had to consider which dark suit to pop on. For the record, she wore tailored black pants and a sparkly short-sleeved, round-neck top.

Which reality starlet, spotted in the front row at VAMFF, wore a prominent Myer designer dress to the David Jones runway at Royal Exhibition Building? Does that count as a fashion fail?

A booming voice echoed through the Royal Exhibition building, acknowledging the intense heat and the lack of air conditioning in the historic building at VAMFF runway 2. The gathered fashionistas, on a day that broke records for the hottest March day on record, giggled and dozens raised their hands when urged to let organisers know if they were feeling ‘uncomfortable’ in the heat.

A laughing fit ensued, possibly brought on by excited nerves, when Cami James and Nadia Napreychikov of Di$count Univer$e met fashion icon Jenny Kee at the launch of 200 Years of Australian Fashion at the National Gallery of Victoria. Others to head to the impressive exhibition included Melissa Jackson, Dion Lee and Lisa Gorman. Di$count Univers$e were the duo who became distraught last year, accusing Miley Cyrus of copying  their designs for a VMA performance

Spotted: Gorgeous model/actor Megan Gale accosted by adoring fans as she arrived at VAMFF for a late runway. Of course, she obliged when asked for a ‘selfie’ or three.

Spotted: Enjoying delicious cheese and cold meats on a platter, served by divine DOC gastronomia staff at the Lavazza bar at VAMFF plaza over this week are a selection of fashionable names. Those enjoying the Lavazza hospitality include WAG Jordan Ablett and Thurley designer Helen O’Connor. Did I mention the melt in your mouth coffee caviar served to all passers-by? What an excellent idea.

And while numerous fashionistas decided it was cool to wear flats to the runways, super stylist and heavily pregnant Lana Wilkinson figured she would stick to her trademark towering heels and definitely pulled off the look with aplomb.

Who knew there was an annual international shoe festival in Malaysia? The three day event from April 30 attracts about 70 thousand shoe lovers to Kuala Lumpur’s Putra World Trade Centre and this year the one and only Jimmy Choo, who was born in Malaysia and now resides in London, is making an appearance. The man who has bewitched so many with his footwear will head to his homeland and there’s even autograph sessions with the creative genius.  http://www.malaysia.travel

Tweet of the week: @BetteMidler ‘Kim Kardashian tweeted a nude selfie today. If Kim wants us to see a part of her we’ve never seen, she’s gonna have to swallow the camera.’

It’s worth how much? Lord Mayor Robert Doyle wore his official mayoral chains for a photo opportunity during the week. He revealed the chunky chain ( make any rapper swoon) is worth about 270 thousand dollars and is made up of silver medallions coated in gold. The previous chain is worth about 1.2 million since each piece is solid gold.

Why was Tonka chef Adam D’Sylva a tad tardy for the Melbourne Food and Wine Festival launch? He was busy rubbing soap on the wasp bite on his finger. Yes, it did hurt. Meantime everyone enjoyed the creamy creations and divine cheeses at the Urban Dairy at Queensbridge Square overlooking the Yarra. The Festival Hub is hosting workshops and tastings throughout the Festival.

Charity of the week: Mimco is giving back. The respected fashion house, headed by creative director Cathryn Wills, has joined forces with Our Watch, a not-for-profit organisation dedicated to preventing domestic violence. The partnership means there will be seasonal capsule collections with 100 per cent of profits to go towards education programs and training to stop the violence. www.mimco.com.au/our-watch