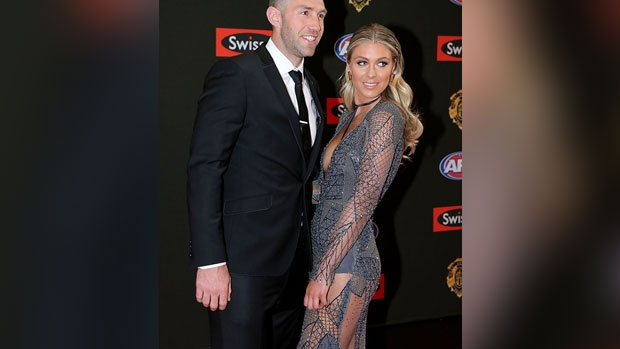 Quote of the week: ‘Very hurtful. You can’t please everyone. These are the sort of comments that put me off ever attending with Trav again,’ said Rebeccah Panozza after being dumped in the ‘worst dressed’ section of an online Brownlow fashion story.

Panozza wore a revealing, plunging neckline, sheer, lace gown that did draw a great deal of attention as she walked the carpet with her partnerTravis Cloke.

Premier Daniel Andrews, also walking the Brownlow red carpet, had a pre-emptive message for social media trolls. ‘If you don’t have anything nice to say, don’t say anything at all.’

Hawthorn’s Jarryd Roughead snubbed a big section of the media despite being begged to stop, leaving his stunning partner Sarah Dunn unable to chat with keen journos about her beautiful red One Day Bridal gown.

Reminds me of a tale of a ticket-less Roughead who, when stopped from entering a Spring Racing event last year by an efficient security guard, resorted to the phrase, ‘Do you know  I am?’ Charming.

Collingwood’s Dane Swan insisted to me that he wanted to wear a beanie on the red carpet but was ordered not to by friends. But he did change his nose stud to a hoop for the occasion.

Tweet of the week: @DeeDeeDunleavy I hope the WAGS have a lovely night at the Brownlow but I couldn’t give a toss what they wear. It’s the players I love seeing in their suits

A very excited Brit Darren Purchese, renowned for Burch and Purchese (an exceptional sweets studio in Chapel Street) has realised a lifelong dream. He says having grown up in the UK watching Neighbours every day, it’s a dream come true to actually appear on the show. He filmed a fortnight ago and considers the experience a tick on his bucket list.

Meanwhile consulting chef to the Melbourne Racing Club Ian Curley has heaps on his plate. He was spotted ripping off his tie at the recent launch of the Caulfield Cup Carnival at Aerial at the Docklands. He figured if executives weren’t wearing ties, he didn’t have to. I like his style.

Curley is looking forward to feeding the crowds at the races again at the Black Caviar Restaurant at the track. He’s also opening up French Saloon next month to complement Kirk’s Wine Bar in Hardware Lane.

Curley was quite chuffed with the successful ‘craning-in’ of the new kitchen, posting social media photos to celebrate the achievement.

‘People are taken away from the everyday when they come to the ballet. You get to cloak all of your problems, cares and woes and when the curtain goes up, you’re taken to a completely different place,’ said Australian Artistic director David McAllister at the unveiling of next years’ season which includes favourites Swan Lake and Romeo and Juliet.

Charity of the week: Massive lunch planned Thursday October 1 at Crown to help people laugh their way through their meal while helping raise funds for Liptember.

Competition: A Royal Night Out is out now on DVD. It tells the story of a glorious evening in the lives to two real-life princesses, Elizabeth and Margaret Windsor. The night reflects the celebrations in London marking the end of World War 2. Directed by Julian Jarrold (Brideshead Revisited)

You could win a DVD copy of the film A Royal Night Out ( Blu-Ray DVD RRP $39.99) by emailing ddemaio@3aw.com.au Please include postal address. Thanks and good luck!