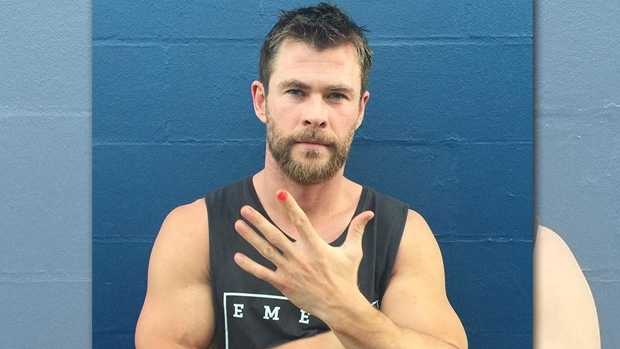 Quote of the week: ?Being a polished man isn?t just about remembering to buy flowers, how many rounds you shout or how much you lift. It?s about saying no to violence against children,? says Chris Hemsworth.

Putting his name and support behind the #polishedman campaign means for the entire month of October, Hemsworth and many, many others, are painting one nail to raise awareness and funds to end violence against children.

He made the above comments via Instagram and since sharing his pledge on social media, there?s been a massive spike in people signing up and helping out. Others supporting the cause include Sam Wood, Zac Efron, Liam Hemsworth, Gyton Grantley and Josh Gibson www.polishedman.com

?I also worked as a publicist in my early acting days,? revealed Kat Stewart (Offspring, Underbelly) at the re-launch of her friend Donna Aston?s fitness hub Burn Lab. At the party, Stewart, who has had her second child, reflected on her previous life in pr. ?I was the publicist for Donna?s first book, ?Fat or Fiction? many years ago when juggling acting and other jobs.?

Meanwhile the fitness guru considers it a ?false economy? when people join gyms and then fail to turn up to train. Ms Aston believes people are more motivated if they have an appointment with their trainer and work one-on-one.  South Yarra?s Burn Lab threw a party, also attended by Sigrid Thornton, to unveil its new location.

Celia Pacquola says people are constantly surprised to learn she is a stand-up comic. The delightful actor stars with Luke McGregor in Tasmanian-based comedy Rosehaven (premieres on the ABC October 12). Pacquola has dedicated many years to live comedy, while building an acting career. So far, she?s popped up in Utopia, The Beautiful Lie and Rove.

Spotted: Taking a brief break from caring for her paralysed husband John, a relaxed Kerri-Anne Kennerley on holiday with her sister on the Rocky Mountaineer: the train that travels through the picturesque Canadian Rocky Mountains.

Lisa McCune and Vince Colosimo are working together on a new ABC production that started filming in Melbourne this week. The Warriors is a provocative eight part Indigenous comedy drama series. It looks at footy through the eyes of two recruits living in a share house.

It makes sense. Custom?designed Tony Bianco shoes are being fashioned for the tootsies of Face of Myer, Jennifer Hawkins for the upcoming Melbourne Cup Carnival. With so much attention on what Hawkins wears to the track, not only the designer outfit but also outstanding and creative accessories are crucial to complete the look.

Eddie Redmayne stars as Newt Scamander in Fantastic Beasts and Where To Find Them. Photo: Supplied

There are millions of Harry Potter fans who are panting for the upcoming release of J K Rowling?s  Fantastic Beasts and Where to Find Them on November 17. In the meantime, IMAX is screening all 8 Harry Potter films from this Saturday. Fans begged for the screenings after hearing the US IMAX cinemas were showing the Potter films in coming weeks. There?s something rather special about a screen that?s 32 metres wide and 23 metres high.

Those waiting for Sephora to open must hang on for a few more days. While about 60 fresh retailers are preparing for their unveil at Chadstone Shopping Centre on Thursday, Sephora has delayed its opening until Saturday. Promises of give-aways and the traditional celebratory dancing are set to attract crowds. Wonder if there will massive queues as per usual when a Sephora opens its doors.

I know what Leyton Hewitt is doing this weekend. The Davis Cup Captain donated free tennis lessons to a local junior footy club fund-raiser. Nine mums are preparing to sip Pimms and learn from the tennis great after their successful bid at the charity ?No Talent? night.