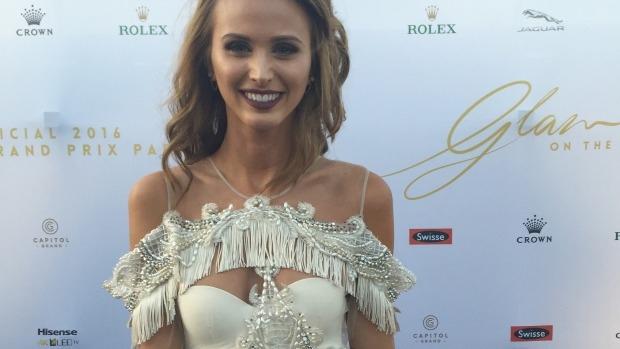 Quote of the week: ‘Let’s just say going to the supermarket is a different experience. Being caught out in my gym wear, I don’t love so much,’ says Real Housewife of Melbourne Chyka Keebaugh, who after three years on the show, has garnered some ardent admirers. She does however love meeting fans wanting to talk career and inspiration.

Oh dear. Racing driver Cameron McConville was looking sheepish after he crashed the Minardi/Swisse Formula One two seater car, with channel nine’s Clint Stanaway in the seat behind him during an early morning spin at the track. The bingle is estimated to have caused tens of thousands of dollars damage to the car, with the entire left wheel blown off and pieces of metal flying off. Thankfully Stanaway walked away unharmed while McConville hurt his finger, trapped by the steering wheel. It was a lucky escape for all.

Big foodie news was revealed at the Mercedes Benz Ladies Lunch trackside at the Grand Prix. As Dan Macpherson hosted the 200 lovely ladies who had gathered for a bite and a champagne or three, chef Shane Delia let slip that he plans at least another two Biggie Smalls eateries in the next 12 months. His first foray into the ‘kebab take-away’ realm has been a massive success and he’s busy planning on expanding.

Brit Davis, the GP ambassador and girlfrield of Joel Selwood, is impressed with the international flavour of the Formula One. ‘I think it puts Melbourne on the map. And we’ve got all the international drivers like Lewis Hamilton, who’s hanging out with the Kardashians. How cool is that.’

The ever smiling Daniel Ricciardo has put his voice to an iconic Melbourne experience. The Aussie F1 driver has voiced a special message for those jumping on the free shuttle trams between the city and the Albert Park circuit across the weekend. The voice-over gives travel and event info. How thoughtful.

The seemingly tireless John Cleese is on a publicity frenzy. He’s been on stacks of shows and programs to promote his live show with Eric Idle and even agreed to chat tabloid media and free speech over cocktails at a Melbourne Press Club event at the RACV club Thursday 17th. The comedy show is called Together again at last…for the very first time at Hamer Hall on Friday March 18.

Tweet of the week: @genesimmons #Deadpool is the finest written super hero film yet. Clever/funny. And Ryan @VancityReynolds rocks. Go see it!!!

The Warhol/Wei Wei exhibition continues to delight with Diesel boss Renzo Rosso, here for VAMFF, popping by to absorb the artists’ brilliance at the National Gallery of Victoria.