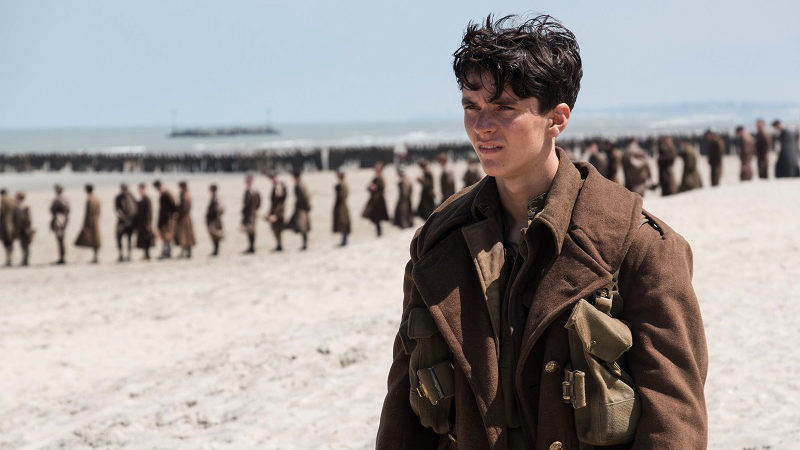 There’s no question: Dunkirk stands high and proud as one of the finest films yet about World War 2. Writer/director Christopher Nolan delivers a powerful, haunting, moving and memorable experience that, in a brilliant touch, turns out to be more immersive than explosive.

In retelling the mass evacuation of Allied troops from the French beaches after a massive military failure in 1940, Nolan bravely sidesteps many of the conventions of the standard war film to create a vivid, often impressionistic vision of a military disaster that was salvaged by the bravery of ordinary folk.

Given the historical volume of the actual event the film is a triumph of understatement.

There are, for instance, no scenes of officers pointing at strategic maps with sticks talking about missions or objectives. There are no scenes back at the war office as Churchill monitors the situation. The only details of the rescue mission are given on the beach and relate only to the getting the men off the beach.

Nor do we see any Germans, who are abstracted as “the enemy”. We don’t see what’s happening on “the other side”, there is no pretense in offering a “balanced view”. This was a brave decision that Nolan uses to great dramatic effect, the point being that when you are getting bombed or shot at, you only know or care about the side of the battle you are on.

There’s not much plot, either. Nor is there much backstory to the characters, with flashbacks or the reading of letters or voice overs from loved ones.

The film simply follows the experiences of a soldier (Fionn Whitehead), a pilot (Tom Hardy) and a civilian skipper (Mark Rylance), one of thousands who took their tiny, undefended vessels into a war zone to rescue as many soldiers as they could.

As we saw with All Is Lost, this risky device of deliberately witholding character information, when done well, serves to shrink the distance between you and the people on screen. In Dunkirk it has the effect of making you feel like you are just stuck with the men the whole time, that their experience is your experience.

As terrific as Nolan’s previous films – Interstellar; the Dark Knight trilogy; Inception; Memento – have been, this is the first time he’s taken such a big risk on such a big film. And he pulls it off spendidly.

And though he clearly had the budget and resources at his disposal to make one, Dunkirk is not a traditional “boom crash” war film where the emphasis is on spectacle and scale.

Indeed, it’s a remarkably intimate film, with the scale of the event – ships, lines of men, burning cities – kept mainly in the background as the soldiers are kept front and centre. Again proving himself one of the best composers of big-screen images – Dunkirk was shot in 70mm using IMAX cameras – Nolan gets the sense of scale across without needing to push it in your face.

That said, the film’s battle sequences are staged with unnerving veracity and immediacy.

The sound of bullets as they tear through metal and men pierce the eardrums; the power of bombs as they shatter piers and vessels is so intense you almost feel the shock waves as they detonate.

The film’s aerial battles involved using real planes, not models or digital renderings. Nolan and his team clearly studied gun camera footage of WW2 dogfights and have replicated them with great realism.

And Nolan proves himself a masterful director of life-and-death tension. After seeing Dunkirk, you’ll certainly know what it feels like to be stuck inside a ship when it is struck by a torpedo, or shot at with a machine gun.

Admirably, Nolan achieves this degree of veracity without needing to replicate the graphic detail we saw in Steven Spielberg’s classic Saving Private Ryan. That, alone, is some achievement.

Playing against the tradition of grand war movie spectacle, there is a haunting, painterly quality to much of the film’s outstanding cinematography (by Hoyte van Hoytema, who shot Nolan’s Interstellar).

Often the screen will feature just one or two elements – a plane, a ship, a soldier – against a vast background of either sea or sky.

Some scenes on the beach are especially evocative. In one simple shot, the camera pans with a soldier as he stands up and walks towards a group of other men on the shore, who are made tiny by perspective. Such carefully crafted understatement gives us a powerful sense of just how wide the beach was, and how vulnerable all those men were.

Cynics might accuse the film of being a well-disguised, magnificently made flag waver extolling the cliched virtues of British pluck, fortitude against huge odds, the stiff upper lip, and so forth. Yet in only one scene does Nolan step over that mark. For the most part the film simply pays tribute to a moral truth, that the British people stood hard and fast – and alone –  in their darkest hour against a determined enemy. If those values are now cliches, the film shows how they were earned.

As a filmmaker Nolan has become widely respected for deploying all the tricks and toys of modern technology while embracing old-school values of uncluttered storytelling, vivid characterisations and shooting on film.

He has long proved a master of both worlds, yet with Dunkirk he adds more personal and impressonistic depth to his cinematic palette. It’s easy to argue Dunkirk as being his best film because it’s the one that draws his audience in the closest.

The film is intended to be a big-screen experience and was previewed at IMAX, where it looked absolutely incredible.

It’ll be a pleasant surprise if we see a film as good as this during the rest of the year. And it’ll be an unpleasant shock if we don’t see Dunkirk all over the next Oscar nominations list.

Mark it down as a must-see.