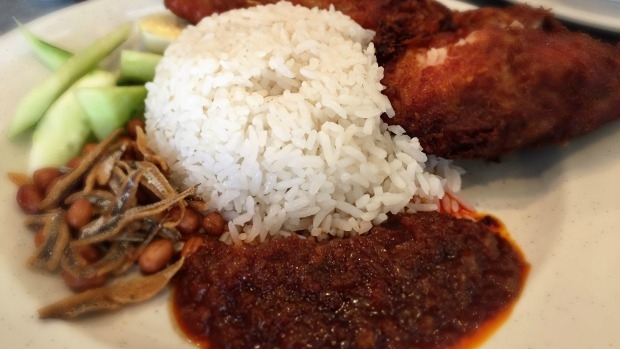 So yesterday we did a walking tour of Kuala Lumpur’s Chinatown – snaking down side streets, nibbling noodles, and holding our noses while we chewed on durian cream puffs. More about that on Saturday when Ross and I chat to our guide Pauline from ‘Simply Enak’, but I’ll share with you our favourite stop along the way.

Pretty much a kopitiam or coffee shop, it’s a fab, cheap, chic local restaurant. According to Pauline the name reflects the cuisine on offer – Ali being Malay, Muthu an Indian name, and Ah Hock Chinese. So you’ve got all the major influences on offer here. It’s positioned just off KL’s famous centre of Chinatown – Petaling Street – just between the police station and the red light district.

Pauline reckons most people don’t know it’s there unless they know to look for it, or unless you’re a backpacker because it’s right in amongst some of the more popular guesthouses.
The staples are all there, And they’re good. Seriously good.

We all know laksa, and we know it to be intrinsically Malaysian, but did you know each Malaysian state has it’s own version? Me neither. We went with the Nyonya Laksa – Nyonya cuisine being that which belongs to the Peranakan or Straits Chinese. This one boasted prawns, tofu, bean sprouts, noodles, egg, and that fabulous fishy sambal that follows you everywhere you go in Malaysia. Seriously one of the best laksas I’ve had.

I had in my head the idea that all roti is the same, that lovely flatbread you get with peanut sauce when you order Thai takeaway. No, apparently again here are plenty of different versions. Roti jala is also known as ‘net roti’ – a hole-y kinda pancake that looks a little like a birds nest. It’s served with a chicken curry and it’s glorious.

We could hardly come to Malaysia without eating Nasi Lemak – it is, after all, the national dish. Spicy chicken, coconut rice, cucumber, egg, dried anchovies, peanuts and sambal – it’s a potent mix of flavours, but it works. Crunchy chicken skin and crispy fish, sweet rice and spicy sambal.

Pauline tells me she took some blokes from Melbourne on a tour of KL’s hawker scene a little while ago while they were researching their new restaurant, and Ali, Muthu and Ah Hock was one of their favourite spots.

The Lucas Group doesn’t generally go wrong when opening a new business, and Hawker Hall is no exception – I guess if nothing else we can take THEIR word for it. It isn’t fancy, and yet it is kinda cool. It’s cheap – none of the dishes we ate cost more than $3. It’s worth going out of your way to track all three of them down – Ali, Muthu and Ah Hock!