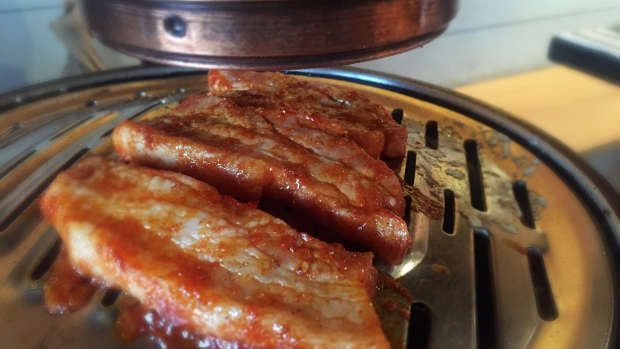 Last week Ross declared eating out should be fun, and he asked where the fun places to eat around Melbourne were. I happened to visit a pretty fun joint last week so thought I’d share it, and maybe we’ll compile a bit of a list too.

First ? Michu is the one I visited for the second time last week. Really just a neighbourhood joint that I really would have struggled to visit if it wasn’t for a mate continually telling me how ‘fun’ it is. So it was Ross’ new rule last week that convinced me to get back there, and I’m glad I did.

So it’s housed in a pretty non-descript Blackburn South side street, Michu is a little industrial-chic, a little Korean charm. With barbecues ready to go on each table you’d be forgiven for assuming you might have to work for your meal, but I was happy to learn the wait staff will cook the goods for you ? lazy, aren’t I!

Even just booking here is a little different. From all reports, the preferred method is via text to the mobile number listed on their Facebook site. They’ll let you know if your booking is confirmed. Busy nights at least they seem to have a two sitting policy ? 6pm and 8pm, but that said we managed to nab a table for 7.30pm on a Friday.

The menu lets you choose any a large number of proteins, noodles, dumplings and veg ? but I find it easiest to go for one of their ‘sets’. They’ll tell you what you get, and how many it should feed.

We settled on the ‘Michu 65’ set, which basically means it’s $65 to feed two people. There were three of us, so we just asked them to make up the difference.

Everyone gets some condiments to start ? some sesame oil, a spicy chilli and (third sauce); plus a little pot of kimchi, one of pickled veg and a coleslaw.

To start, dumplings. Glorious little fried Korean dumplings, we chose a combo of all three on offer ? so pork, prawn and vegetable. They were all great.

The coals arrived, radiating red and hot as hell.

The scotch fillet goes on whole, then it???s chopped with a pair of big, shiny, scissors.

Basically wait staff are in charge of the meal, but don’t be afraid to tell them if it things are happening too fast. We started with the scotch fillet, it goes on whole, then once nearly cooked it’s adeptly chopped with a pair of big, shiny, industrial scissors to finish, and moved to the side to stop cooking from whence you pick slices off one at a time with chopsticks.

Chicken next, juicy thigh with a sweet soy marinade. At the same time the mushrooms go on, one button mushie each ? don’t get too excited.

For the Korean sweet spicy pork belly and corn the cooking plate is changed, this stuff is pretty messy, but of course it’s tasty. Again, just a small slice of corn on the cob each, but it’s lovely and sweet.

It’s well priced, and there’s always a bonus cost-wise when you can bring your own wine. D?cor is bright and funky, the noise level is happily buzzing. It really is just fun.

Now, we better compile a bigger list of fun places to eat, I’ll start with the options below, and you guys can add to it:

Burrito Beach Bowl, Gertrude St Fitzroy ? I wouldn’t personally use, it but the highlight of this northside Mexican eatery is the big skate bowl in the middle of it. It’s seriously deep, so I believe you need to sign a disclaimer in order to use it, but if you just want to watch others risk their necks the Mexican cuisine is actually quite passable!

La Tortilleria, Stubbs Street Kensington ? Speaking of Mexican, how fun to sit and eat in the middle of a tortilla factory in an industrial estate.  Good, fun, cheap eats.

Welcome to Thornbury ? Want your choice of food trucks? This seems to be the best place to do it, Melbourne’s first permanent Bar and Food Truck Stop, licensed for over 700 people and from all reports family friendly.

Big Hueys Diner, Coventry St South Melbourne  ? There can’t be that many real American diners left, this is a fun one, jukebox and all!

Munich Brauhaus, South Wharf ? One from Scorcher Davidson – Steins of beer, oompah bands and schnitzel galore ? what more do you want?