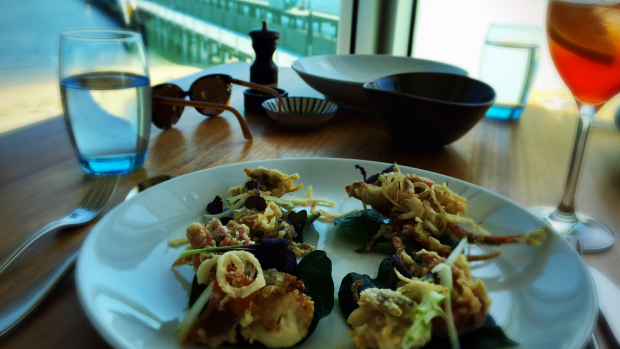 Twenty six degrees last Thursday, and I wasn’t going to be anywhere else but near the sand and the sea somewhere. Given it’s had a pretty major revamp, Middle Brighton Baths seemed as good a choice as any.

I have to say it was my first visit, but when we posted a photo of our meal and the view on Facebook, there were a couple of people who hinted this place had its detractors in the past. Our experience? Pretty bloody good.

You’ve got the option of two levels of dining, a relaxed caf? with all day fare downstairs, or a more formal restaurant offering upstairs. Scorcher and I thought we’d go fancy, so we took a pew in front of the glass on level one and basked in the sunshine.

Mussels were plump and tender, and the juice was tasty as hell.

First thing that became clear was that the service here was impeccable. We were seated, handed menus, drinks orders taken ? all in quick succession (without being rushed). It was impressive.

For something clearly meant to be a more formal offering, it still feels relaxed and modern. I think the reno has been about paring things back a bit, making the view and surrounds the real feature.

From the menu, the entrees were seriously generous. A big bowl of fresh mussels marinere from Boston Bay, SA, were cooked simply with garlic, shallots, white wine, and parsley. They were plump and tender and the juice was tasty as hell ? sadly no bread to dip in it, but at least we got a spoon.

There was no doubting the generosity of produce.

Just as generous was the soft shell crab starter; the crab is quartered, dusted with corn flour and egg whites then fried until crispy. It’s served on a betel leaf with coconut yoghurt, finger lime, apple and shallots ? perfect finger food to wrap and eat. Four of these honestly were too many for me, but I no complain!

From the mains, tagliatelle is served with plump SA prawns, with a crayfish bisque. The sauce bordered on a little too rich for me, but there was no doubting the generosity of produce, the pasta itself was teeming with prawns with a halved grilled prawn in shell atop.

The standout, though, was the slow braised ox cheek. Marinated for at least a day in red wine, it’s pan-sealed, then slow cooked in veal stock. The tender meat is then served on creamy mash with bone marrow on the side, it was a cracker.

The slow braised ox cheek was a standout.

If you’re looking for an excuse to check the place out, try the $25 steak night on Tuesdays, or a $30 seafood platter on Wednesday nights. Or, you’re hardly slumming it if you stay downstairs in the caf? and enjoy a more casual meal of lemon pepper calamari or Morocan spiced chicken salad.

It’s often said that the places in Melbourne with the best views don’t try hard enough to produce food to match, well it’s not the case here ? Middle Brighton Baths are definitely a fine option for a fine Melbourne day.