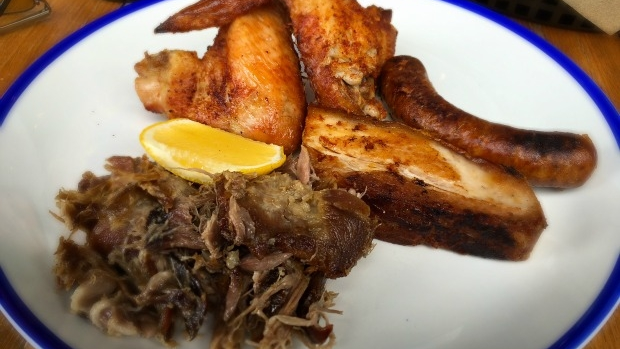 Let’s be honest, I haven’t had much occasion to head to Hadfield before; but my mates in Glenroy were well and truly familiar with Middle Street Food and Coffee.

The business started out of a catering outfit run by owner Simon Polkinghorne and his wife Kirsty. Simon’s previous stints were with industry stalwarts Teague Ezard, Jacques Reymond and George Calombaris, it must have made sense to eventually use the shopfront as a caf? given his cooking pedigree.

These guys are big on working with reputable suppliers and producers ? Joneseys milk, Green eggs, Warialda beef, and local coffee roasters and bakeries.

But my advice is to hold out until Sunday when you will one of the most generous, tastiest barbecues in town. You won’t believe the value here – $25 will get you a mammoth plate of meat, and you’ll get three salads to share, plus an array of condiments (mustards, pickled veg, pickles).

The meat was magnificent. A chunky duck merguez sausage. Then, some of the best buffalo chicken wings I’ve had. These ones are brined then cold smoked, tossed in oil and a smoked paprika based rub; then steamed for an hour so they are tender as hell. Finally, they’re chargrilled over a low burning woodfire barbecue. Brilliant.

A serve of tender, tasty pulled lamb neck has been brined, than slow cooked on a low temp for three and a half hours. It’s seasoned with coriander and cumin salt and a simple squeeze of lemon.

We finished with a large piece of chargrilled pork belly with cider glaze. I couldn’t actually believe the plates of meat that arrived weren’t to be shared between two.

The salads were stunning too – fresh green beans with goats cheese and almonds, a tasty Jasmine & wild rice salad with currant and herbs; and a heartier spiced summer slaw. It wasn’t fathomable that this selection could be offered for just $25 a head; most of us couldn’t finish what was placed in front of us.

The difficulty, of course, is that there ain’t all that much room to fit everyone at Middle Street. Until now, it has only seated a mere 8 people inside, and 16 outside, but ? they are completing renovations this week, and should be able to fit a minimum 18 inside once done. They’re due to re-open this weekend.

In winter, the barbecue offering will switch over to a Sunday roast, from all reports they are just as enticing.

It’s not licensed, but if you’re lucky enough to bag a chair inside you can BYO.

Haven’t heard of Hadfield? Maybe it’s time you went and found it, and more specifically made it to Middle Street.